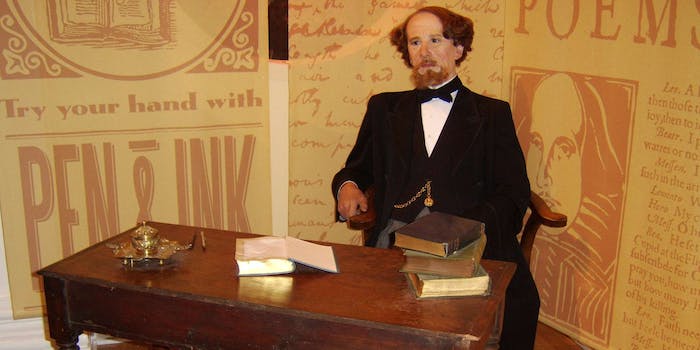 Is Shakespeare unrelatable and out of date? Some people seem to think so.

In what may be one of the biggest storytelling smackdowns since Ernest Hemingway and F. Scott Fitzgerald, in a recent tweet, Ira Glass has come out against Shakespeare. In the English-speaking world, such a statement is tantamount to heresy…or is it? He’s actually not a fringe minority, and plenty of perfectly respectable people don’t think Shakespeare’s all that and a bag of chips, for quite sound reasons. (Surely I’m not the only one who finds the parade of Henrys intolerably dull.)

Is Shakespeare unrelatable and out of date? Some people seem to think so, including Glass, who said that Shakespeare “sucks.” His plays can seem stiff, awkward, and unfamiliar to people who don’t feel comfortable with iambic pentameter (no, it’s not a fancy cocktail), and some suggest that while Shakespeare is fun for actors and literature nerds, he’s maybe not for everyone else. Even now, students are reading bowdlerized versions of his plays in classes to get their required Shakespeare without struggling through it.

He’s often credited for his huge contributions to the English language (did Shakespeare really invent as many words as people claim? Or was he simply using the street slang and lower-class dialogue of the time?) while contemporaries like Marlowe are ignored. At the time, Shakespeare was writing the ultimate in pop culture, akin to the trashiest television shows of today. He wasn’t aiming for high art, yet he’s been idolized as an author of some of the most famous works in the English-speaking world (assuming he wrote them).

As it turns out, Glass regretted his words, but not before the Internet collectively wondered whether this arbiter of modern culture was going to turn on kale, almond milk, quinoa, or some other beloved staple. But then the more nuanced responses started emerging from the woodwork. Alyssa Rosenberg, writing for The Washington Post, noted that Shakespeare’s work is alive and well, and that discussing his work should be an important part of relating to it. Criticism and robust debate are a critical part of any artist’s reception and stance in culture, and putting Shakespeare on a pedestal serves no one, which may have been Glass’ larger point when he tried to articulate why he personally can’t get into Shakespeare.

He’s hardly in bad company. Well through the 18th century and beyond, people routinely performed heavily edited versions of the plays, indicating that critics, directors, and audiences alike felt that there was something lacking in Shakespeare’s work. This includes noted authorities like literary critic Samuel Johnson, who approved of some rather radical changes to the Bard’s plays. Johnson’s defense of a Lear in which Cordelia lived to the end spoke to the sensibilities of the time, just as Glass’ comments speak to his own beliefs as a cultural and social critic.

Tolstoy and Shaw both loathed Shakespeare, and it wasn’t out of jealousy. Both writers attacked the plays on critical grounds, with Tolstoy adding that Shakespeare had already become a sort of literary paragon, a man put in a position where he could do no wrong, and anyone who disliked his work would automatically be classified as a person of dubious taste. Both writers felt that his work was stiff, while T.S. Eliot questioned whether Hamlet worked as a play—asking critics and the public to think about what makes literature successful. “We must simply admit that here Shakespeare tackled a problem which proved too much for him. Why he attempted it at all is an insoluble puzzle,” he said.

In 1662, Samuel Pepys wrote: “[We went] to the King’s Theatre, where we saw Midsummer’s Night’s Dream which I had never seen before, nor shall ever again, for it is the most insipid ridiculous play that ever I saw in my life.” Tell us how you really feel, Sam. In the 18th century, Bevill Higgons approved of edits made to The Merchant of Venice, arguing that Shakespeare’s writing was nothing more than “rude sketches” and editor George Granville had “adorned and rescued” it.

“How boring, how small Shakespeare’s people are!” wrote D.H. Lawrence in 1928.

In other words, Ira Glass is hardly an original thinker, at least, not when it comes to Shakespeare. But his words should spur an interesting conversation about what we talk about when we talk about Shakespeare, and what we get wrong in those discussions. His position as a literary idol who is unassailable on all grounds is a falsehood, for it provides no room for discussion about the very real problems with his plays. The treatment of Shakespeare as canon also elides the very real and complex history of English literature, of which he is only a small part—again, assuming he was an individual and not an aggregate, and, for that matter, assuming he was a he in the first place.

Much of the criticism of Shakespeare focuses on his plays, but of course his 154 sonnets are an important part of his literary work as well, and let’s face it, in 154 poems, you’re going to find much to criticize. There’s a reason some of his sonnets are more well-known (18, 73, and 116, for example) than others, and that’s because there are a few that, in the parlance of Ira Glass, suck.  Sonnet 145, for instance, is pretty much universally hated and is sometimes referred to as his “unloved” sonnet (perhaps because it is bad), and 143 isn’t exactly a paragon of poetry.

Glass was simply saying what many people are thinking, albeit in a crude way. Shakespeare can’t be treated as perfection incarnate, the height beyond which we cannot reach. Hundreds of years later, literature has changed dramatically, and so have we, on a cultural level. Shakespeare wasn’t the best English-speaking writer who ever lived, and it’s perfectly fine to admit that, just as it’s entirely reasonable to confess that he’s not really to your tastes.

Critically, though, we need to be talking about what works and what doesn’t in Shakespeare, and how his plays have shaped theatre and literature in the English-speaking world, without idolizing him. If we start from the basis that Shakespeare was a perfect writer, where do we go from there? His critics throughout history have raised the same question, and have pushed readers to challenge their personal relationship with Shakespeare as well as the one pounded into their heads in school and through years of socialization.