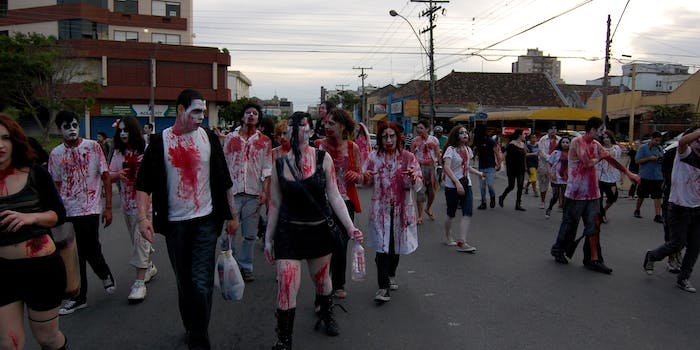 A 64-year-old woman was struck by a car during Comic-Con's Zombie Walk this weekend. There's a lot more to the story.

Disturbing scenes unfolded at Comic-Con this weekend, as a woman was struck in a hit-and-run at a crowded intersection after a deaf family’s car was mobbed by a Zombie Walk.

Initial videos show a black sedan speed through a group of conventiongoers—many dressed as zombies for the annual Zombie Walk—knocking down at least two, a man and an elderly woman. The car then speeds off.

How did this happen? Further details have emerged that can help explain the driver’s behavior. For one, the 48-year-old driver and his entire family were deaf (in the car with him), and unable to understand what the people angrily remonstrating with them were saying.

Video footage also shows pedestrians refusing to move, and even walking back toward the vehicle after passing it, further delaying it after it had already sat stationary for more than 10 minutes. They also banged on windows, eventually even smashing the windshield.

In the videos you can hear calls in the crowd to “flip the car” as it first began to inch forward. While the family will not have been able to hear these, it’s an indication of just how hostile the crowd had become.

In one video (below), a pedestrian even opens one of the car doors and attempts to pull a passenger out of the vehicle.

“The crowd started punching windows,” SDPD officer David Stafford said to Deadline. “They even jumped on the hood of the car. They smashed the windshield.”

The driver was then chased down the street by the crowd, and halted upon reaching a police officer. The Daily Mail reports he was subsequently taken in for questioning before being released, but remains under investigation. The 64-year-old woman’s injuries were serious, “stripp[ing] the skin from her upper arm to the elbow, exposing the bone,” and potentially breaking the arm.

In the context of the angry crowd, one can understand the driver’s panic, if not quite justify his subsequent action. But it does beg the question: For an event of this scale, why were there no stewards or traffic cops in place to prevent exactly this from happening?