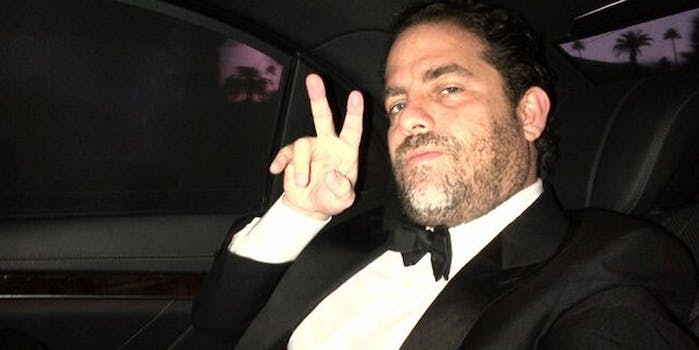 Ben Avery claims he was stiffed on a $950 delivery. Then things got personal.

One of the downsides of the app economy is worker pay is regularly tied to the whims of consumers. Delivery drivers for services like Pink Dot and PostMates get paid a fee, for example, but unless the person they’re delivering to tips, they can often make below minimum wage when gas and time are factored into their costs. When you’re making deliveries to millionaires in Beverly Hills, getting stiffed on a job can sting even worse.

Enter Los Angeles comedian Ben Avery, who claims he recently made a $950 delivery to a mansion only to get stiffed on a tip. He took to Twitter to vent his frustration and sparked a feud with a Hollywood director in the process.

For Avery, delivering food in Beverly Hills is often a frustrating experience. “It’s common to deliver $200 worth of food to someone with a Lamborghini in the driveway and receive no tip,” he says.

Earlier this month, Avery was sent to the Apple Store to pick up an iPhone for a customer named Brett. “It was $950 and took awhile since it was at the century city mall. When I got to Brett’s place I got lost in it trying to find which house on his lot was the house I was supposed to go in. I finally found a maid who said Brett just left.”

Ben left the package with the maid and told her Brett could finalize the payment through the app.  An hour later, he received $0.00 for a tip. “For that hour, I made below min wage not to mention I’m using my gas,” Avery vents. “I was tired of this happening to me.”

It turns out that Brett was actually Brett Ratner, the director of the Rush Hour series and X-Men: The Last Stand. “I looked up his net worth,” Avery said. “$65 million.”

At that moment he made his plan. “I decided I was gonna tweet at him once a day asking for $5, figuring he would probably block me or whatever. Two weeks go by of me tweeting at him until he finally responds.”

Here’s their exchange from Twitter. You’ll see that Ratner believes the order to be an error, one perhaps made by his assistant. 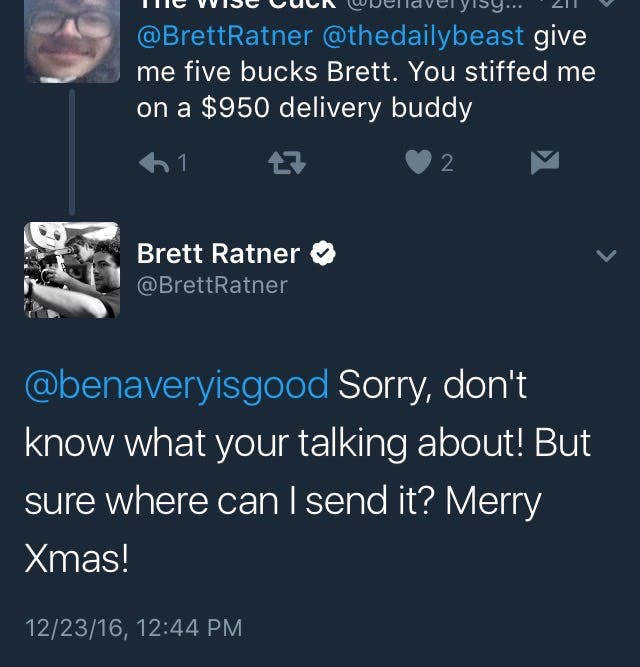 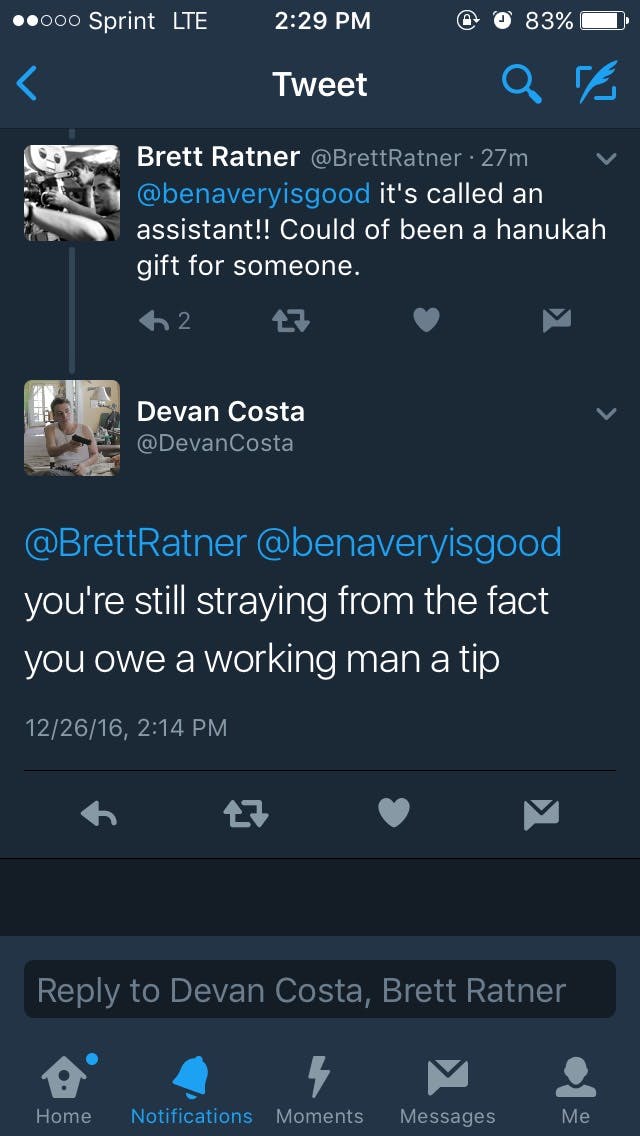 Finally, Ratner apparently sent him a tip via Paypal—only it wasn’t what Avery had in mind. 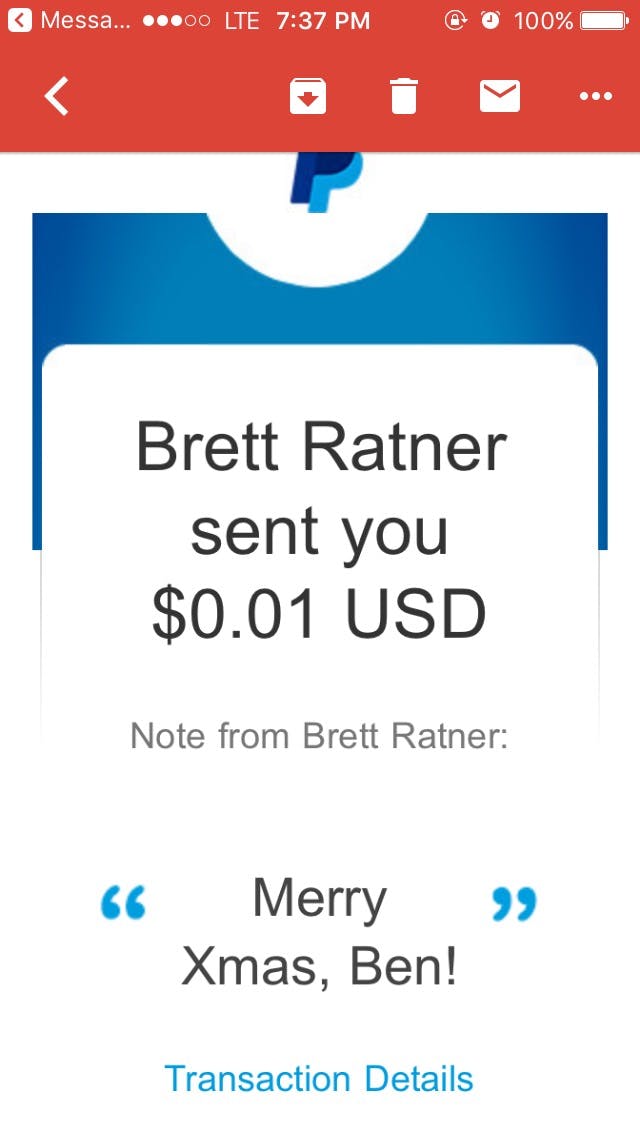 “When I received the tip for 1 penny on my Paypal from Brett Ratner, wishing me a merry Christmas I thought it was hilarious and a great owning by Brett. So I posted a screenshot of it at him. And people went wild.” Avery’s friends in the L.A. comedy scene saw the tweets and immediately started replying at Ratner. That’s when, Avery says, Ratner started messaging him directly on Twitter.

Ratner’s response made Avery’s holiday. “At this point, I was with my friends I was visiting in Austin, Texas, for Christmas and we are going ham waiting for Brett’s responses.”

Ratner sent Avery $100 to make up for the original Paypal message, which he claimed was a fake screenshot, and asked Avery to delete the tweets. 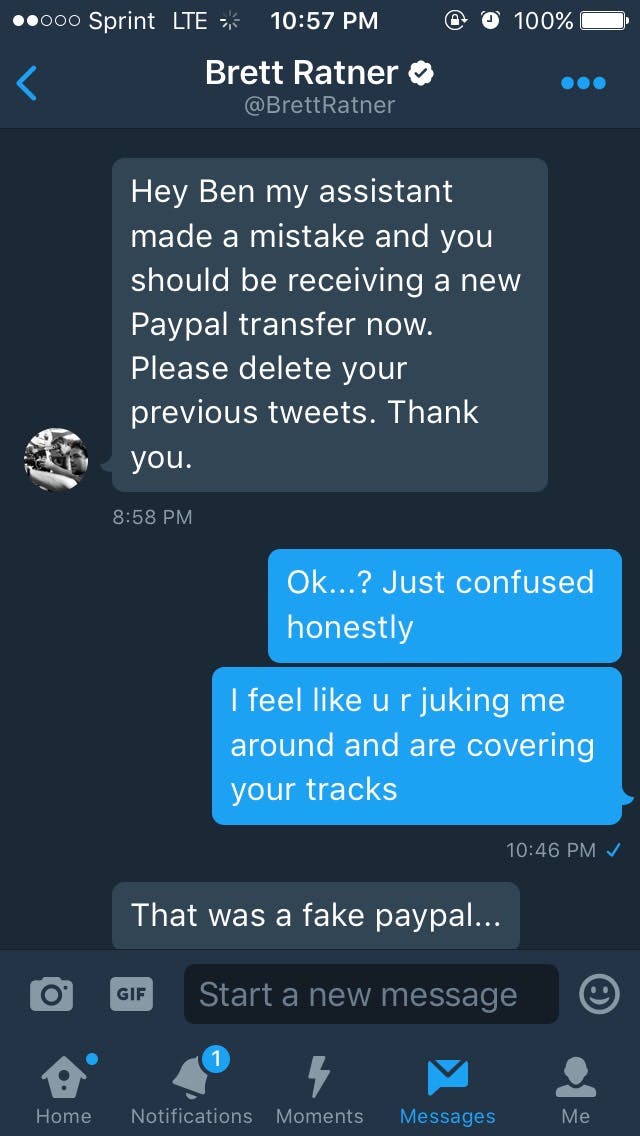 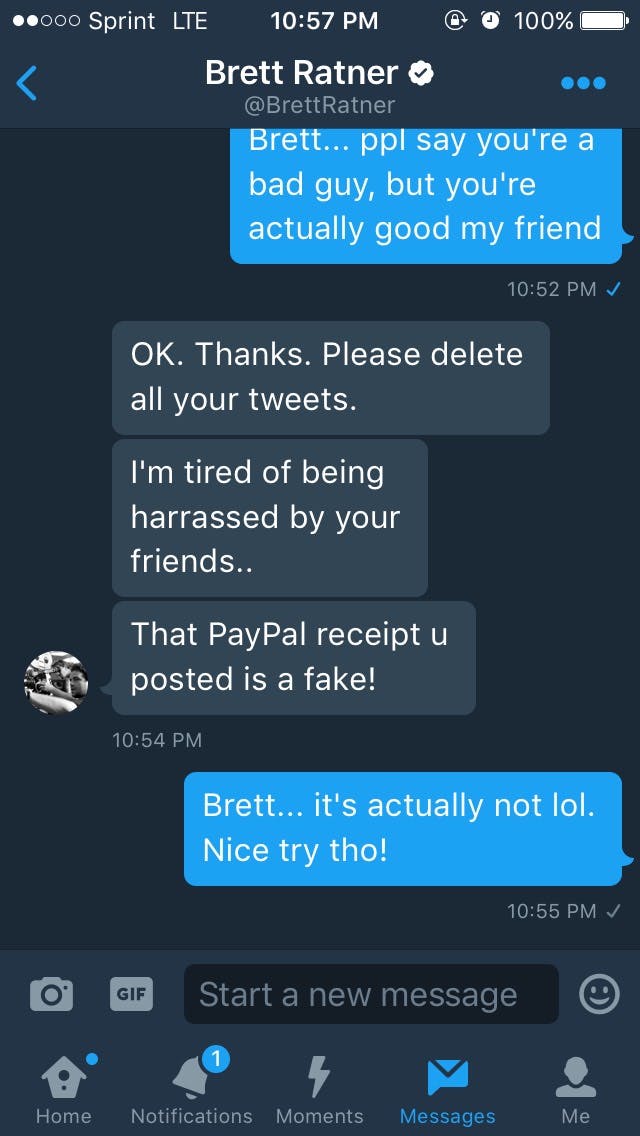 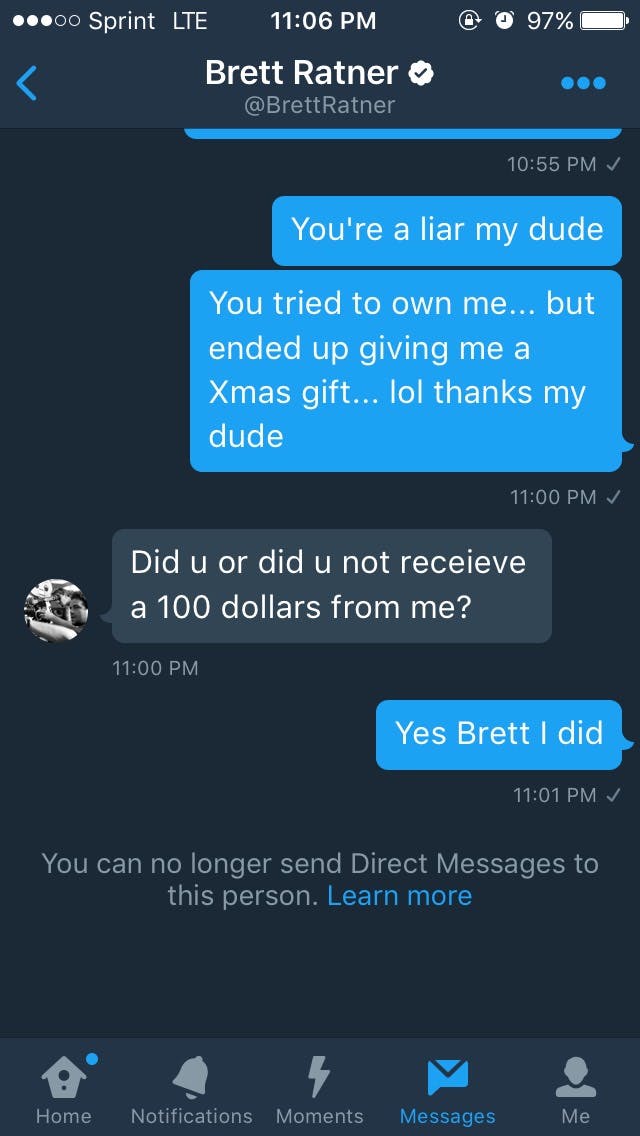 Once he confirmed $100 had been received, Ratner promptly blocked Avery on Twitter.

Avery insists there are no hard feelings, though. “I won. I made a $100 being a troll. It does suck because I love the Rush Hour movies. Much love to Brett. I’m leaving up the tweets because I think it’s funny. I hope Brett isn’t mad. I have no hard feelings and really hope the penny donation wasn’t fake. It’s so funny. Brett should take credit for it. Brett, if you’re reading this, I would like to be in Rush Hour 4. Happy New Year bud.”.

When asked if the app he works for was aware of the trolling, Avery simply replied, “No, they have no knowledge of this. I might get fired once this article is published but it was worth it. ”

At least he’s going out on top with one last good tip.