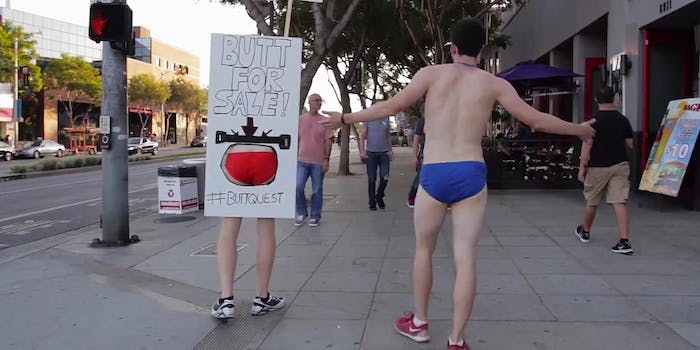 Tattoo your name on this comedian’s butt for just $10,000

The dude behind #Buttquest is hoping you'll write a check his ass can cash.

Kickstarter certainly isn’t the Wild West of crowdsourcing that it used to be. Ever since a man managed to raise over $55,000 to make potato salad in August, artists have learned they have to compete for your cold hard cash. With endless droves of bands, filmmakers, and comedians all vying for a chunk of your change, 23-year-old Nick Brown realized he needed to set himself apart by letting backers write a check his ass can cash. Literally. For a mere $10,000, you can “GET YOUR INITIALS TATTOOED ON NICK’S BUTT.”

Brown’s mission is to raise $15,000 to fund his TV show, South Canada, he’s put up a prime piece of rear-end real estate for sale. With assistance from his comedy partner Josh Frackleton, Brown’s journey to fund his comedy pilot quickly become a comedy itself as the Butt Quest, or #Buttquest, was born.

From hitting the streets of West Hollywood, to listings on eBay, the boys have gone all out in their blitz to raise some cash for comedy by auctioning off some cheek. “We wanted to think of something totally outlandish, and a butt tattoo was just one of many bizarre thoughts that popped into our head,” Brown told the Daily Dot. Brown hopes the those donating to his cause see his “clean, practically hairless” hindquarters as the investment they are. If Brown finds success in South Canada, he predicts that in 20 to 30 years, he “could be a famous actor-director, and guess what—your name will still be right where you left it… on my butt.”

With five out of the five $10,000 butt-tattoo pledge levels remaining, and less than three days left to fund the project, Brown is open to having as many individuals stake claim to his backside as possible.

“It’s ultimately been a liberating experience. After a while you start to recognize that everyone is on a Butt Quest of their own, in one way or another,” he proffered. If his own quest has brought this many people joy, we have high hopes for his comedy.