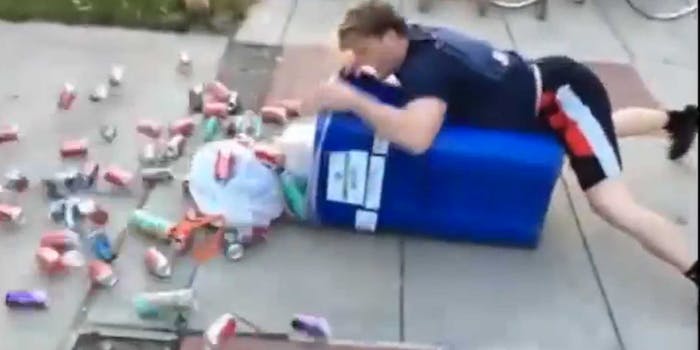 This college bro is the unlikely king of Vine

The video service's latest star will do anything for a laugh.

Take your typical class clown, then give him a fearless attitude, an impeccable sense of slapstick, plus a dash of sheer athleticism, and you’ll have someone approximating Logan Paul. The Ohio University freshman who has vaulted to the top of the burgeoning Vine auteur movement, amassing nearly 1.5 million followers to date.

Paul’s first greatest-hits compilation hit YouTube less than 24 hours ago, but it’s already racked up more than 300,000 views. While some of his antics are pretty tired—has this dude really never seen “Shit Girls Say”?—most of them will have you guffawing despite yourself. His pratfalls alone put Chevy Chase to shame, and his tendency to observe fellow students in safari mode has a jarring immediacy to recommend it. The conceptual snippets, happily, are some of the strongest in the bunch.

Most college graduates, of course, are thankful that the world was never offered evidence of their pranks . If we were in the subway car where Paul climbs the bars like a monkey or belts a Journey song, we’d be pretty damn annoyed. It’s not without justification, either, that one man pulled into a gag calls him a “stupid white mothefucker.” At the end of the day, though, it’s not a bad way to relive your time as an obnoxious, invincible youth.