This roommate situation has gone completely off the rails. Whose side are you on?

We can’t pick our family, we can’t pick who we fall in love with, and we can’t pick our freshman college roommate. So begins the saga of @jessyjeanie and @nikkihomanick, two young women enrolled in Penn State (class of ’20), fated to share dorm space for an entire school year.

It’s difficult to say how their beef really began, but let’s call it a clash of temperament. Like all mismatched roommates, the girls have blown off steam about one another’s infractions; the crucial detail here is that they were doing so on social media. That meant some subtweeting, which prompted some IRL passive-aggressive behavior, which in turn went viral. 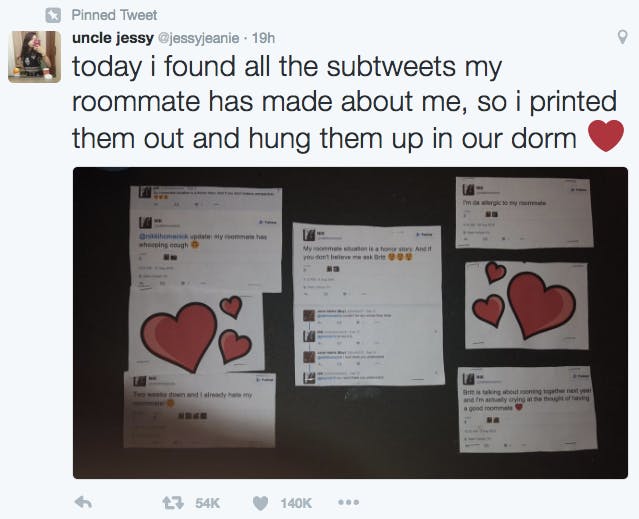 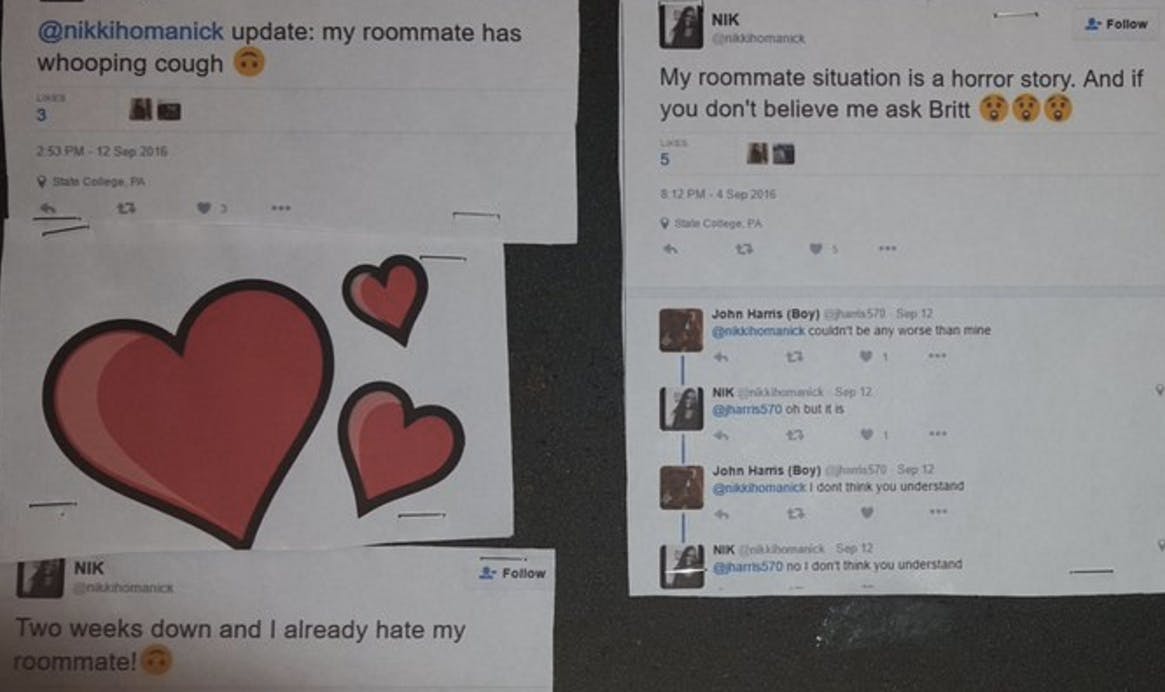 Isn’t higher education inspiring? The future leaders of the world at work. Anyway, this collage is pretty hilarious, though not exactly a defusing tactic. 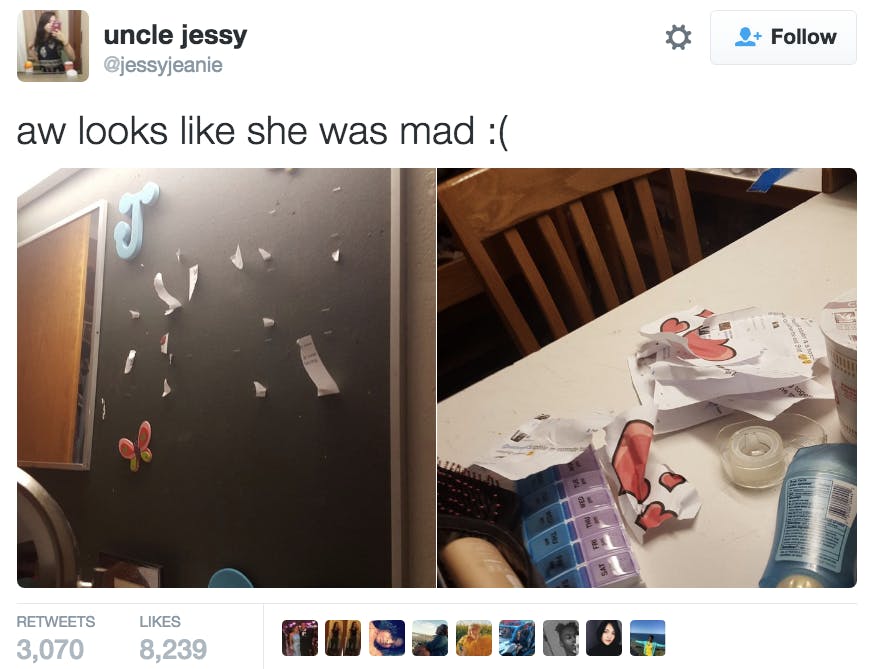 Word travels even faster on campus than it does on the internet, and as a result, the Jessy-Nikki war was soon the talk of PSU, then all of Philly.

And while Nikki hasn’t addressed the fallout on Twitter, Jessy has had to defend herself against her roommates’ friends and assorted haters—in between retweeting examples of Nikki’s evidently prodigious drinking. 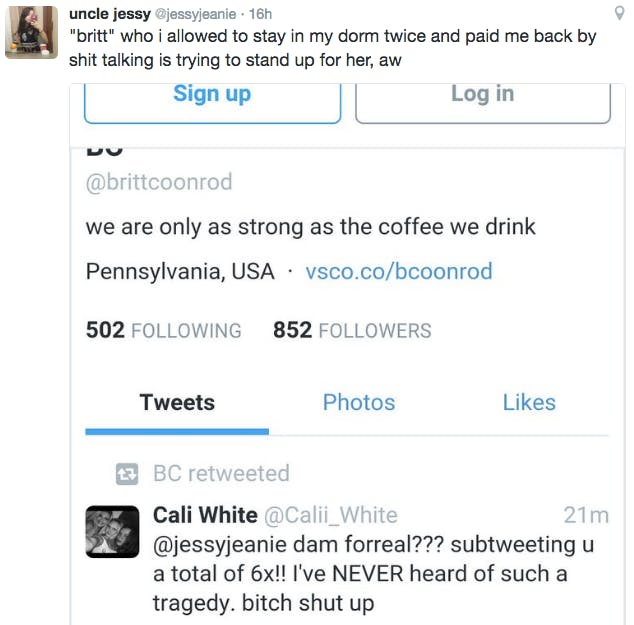 The peace talks, meanwhile, collapsed almost as soon as they began. 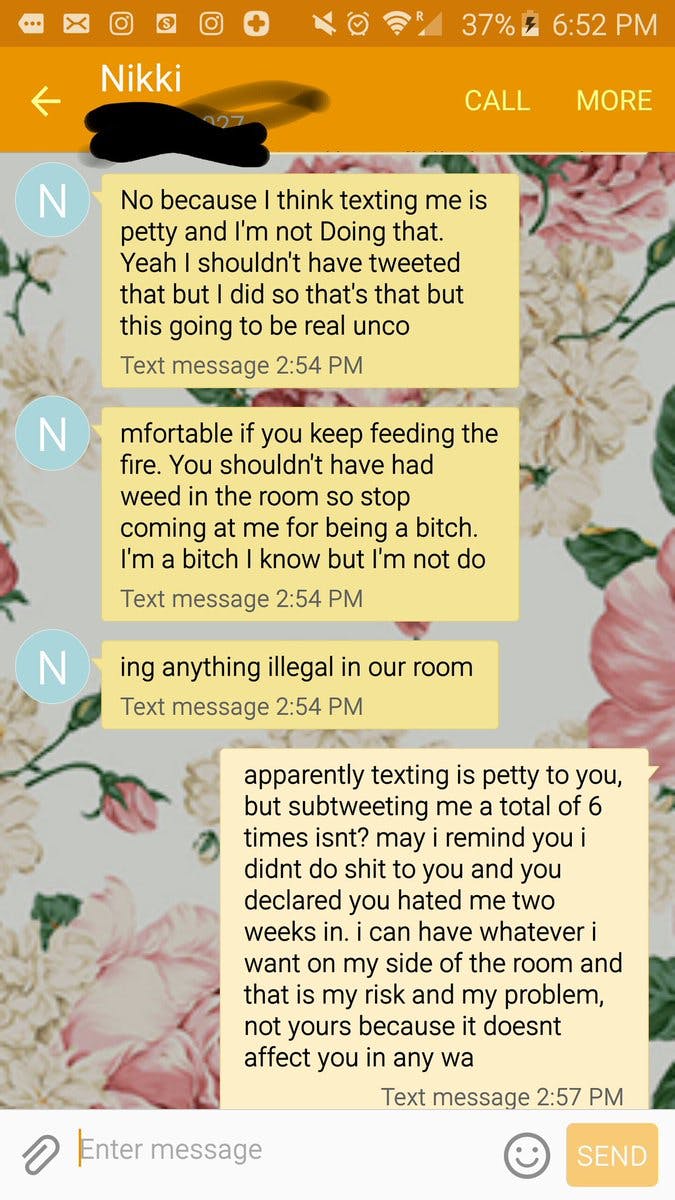 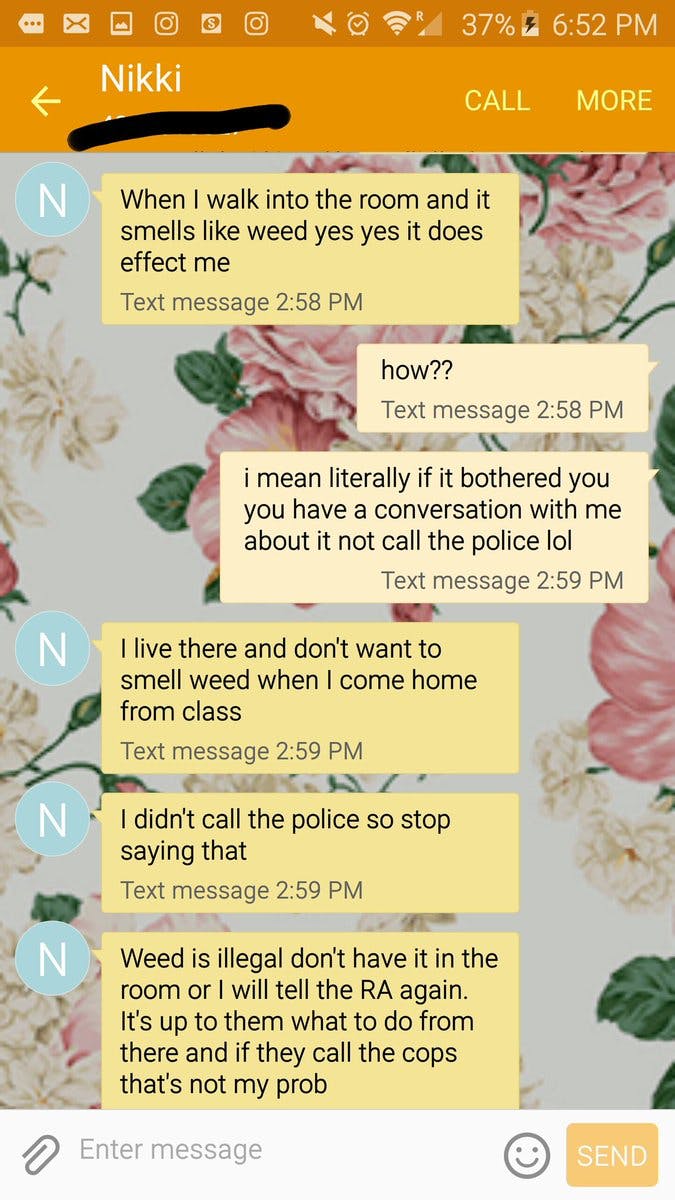 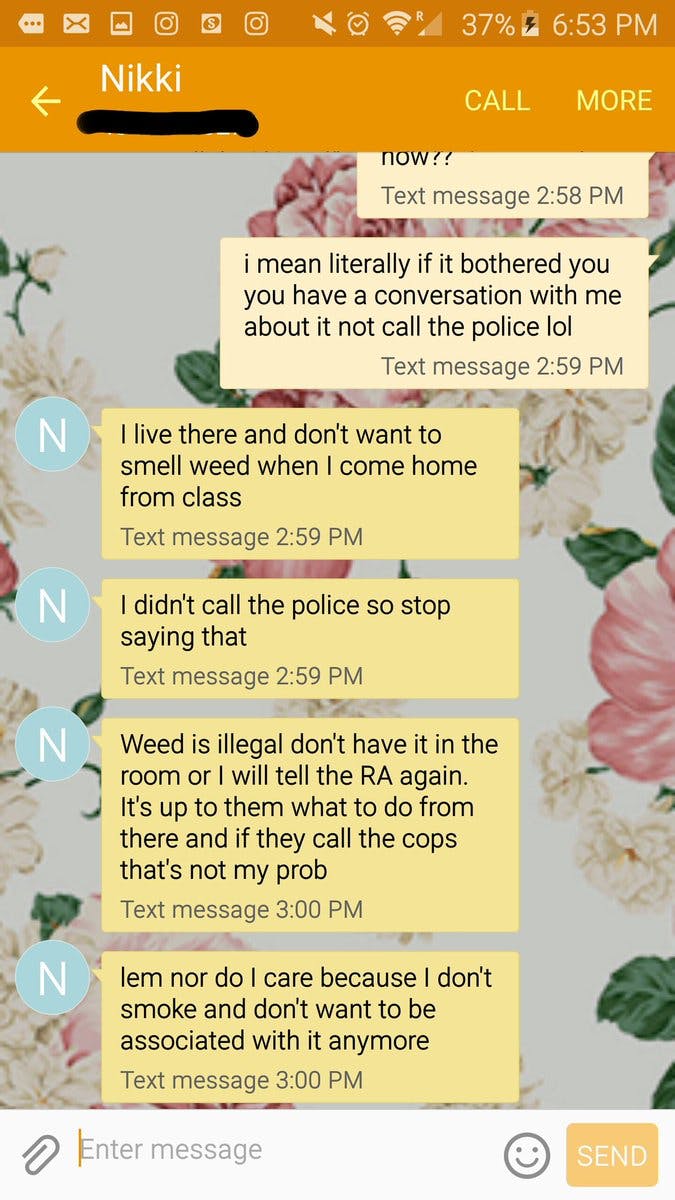 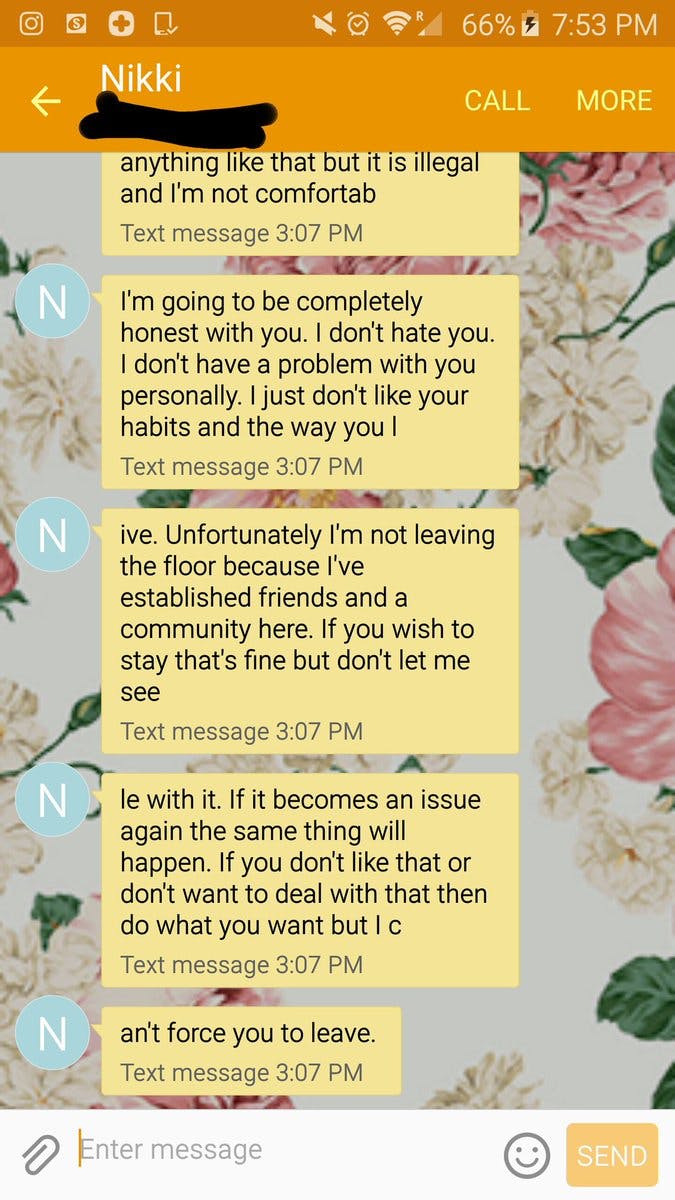 Then, the most dreaded of all texts. 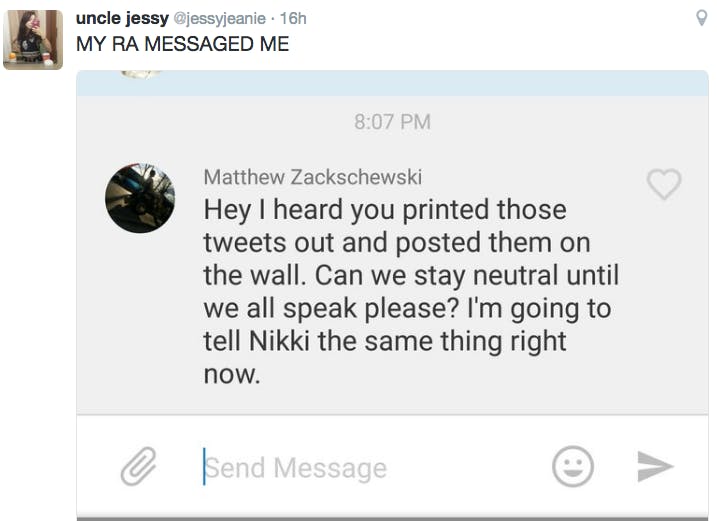 That poor guy has no idea what he’s walking into—but, as we all know, becoming an RA is a Faustian bargain. RIP, dude.

Oh, also? When enough Team Nikki forces amassed outside the room, Jessy called the campus police herself to dispel them. This is almost definitely how these people want to make a living.

It seems, for now, that there’s no solution in sight.

But hey, it could be worse. They only have to avoid each other while sharing a room for the next eight months, then not run into each other at school for another three years, and then spend the rest of their lives dodging one another at class reunions. And never, ever tweet again, for any reason.