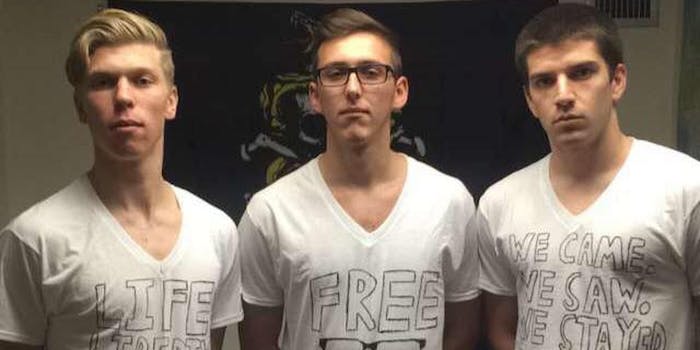 His mellow was totally harshed.

The average American undergrad has a tough time making ends meet while school’s in session. Book costs deplete bank accounts, ordering delivery adds up (because nobody wants to be caught dead in the dining commons), and the dankest, skunkiest green isn’t going to pay for itself.

But when one Emerson College student tried to take advantage of the modern sharing economy to score some extra cash, he faced the wrath of his education institution and could be expelled altogether.

Jack Worth, 19, listed his dorm room on Airbnb in January because of the steep costs of room and board. And with Emerson’s primo downtown Boston location, he saw opportunity to offset those unfair, unreasonable costs. “There’s a high level of interest of travel in this neighborhood because it’s so centrally located,” Worth told Boston.com. “I saw this as a way to make some money, but also help people out.” According to that report, Worth removed the listing after the private liberal arts college caught wind of it late last week. Airbnb reportedly fined him $150. Emerson then threatened Worth with misconduct charges.

“The Emerson College Residence hall policy and the housing contract that undergraduate residents sign,” a statement from Emerson said, “prohibit students from subleasing or renting College housing units or beds to protect the residents and the community from exposure to safety and security risks.”

Classmates of the selfless 19-year-old have come out in support with a Change.org petition, “Free Jack Worth,” which asserts that there is “nothing criminal with providing cheap housing to travelers.” Other supporters pled Worth’s case in the comments.

“Jack is my frisbee dad and team mate [sic] and you can’t turn your back on either,” wrote Simon Gibson Pimrose.

Ari Howorth, a fellow Emerson student, shared a story of Worth’s altruism: “Jack spent 3 hours late at night once by himself helping a drunk homeless man to find shelter,” wrote Howorth. “He is a man who truly cares about people and if the conduct board can’t see that then we have to show them.”

The petition, launched on Jan. 31, has accrued 300 signatures at the time of this writing.

Worth’s case will be brought up in an upcoming student conduct hearing, according to the Change.org petition. Students will present signatures at that time.