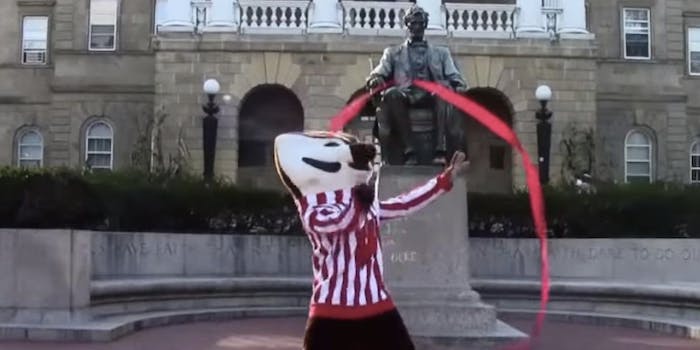 Big Ten mascots strut their stuff to ‘Shake It Off’

Forget faculty-student ratios and graduation rates. The big competition is over mascots.

YouTube has become the place to celebrate the acrobatics and antics of those crazy kids who disguise themselves as creatures and characters and spend their collegiate years in a furry suit dressed up as a rodent cheering on hundreds of thousands of screaming fans. Thanks to TheRealSparty, the cartoonish mascot for Michigan State, we can enjoy a generous selection of sideline icons strutting their stuff to the Taylor Swift song Shake it Off. We won’t ask how he managed to upload the clip without human hands.

Despite some of these mascots’ best efforts, not all anthropomorphic rallying symbols are created equal when it comes to dancing and cavorting to the beat of an uptempo hook. At the top of the talent pool, you have Bucky Badger from the University of Wisconsin, who does a mean Taylor Swift imitation and shows off some limber moves that point to a gymnastics background. Herky the Hawk from the University of Iowa is quite the pantomime artist and shows off some slick dance steps performing alongside the marching band in the middle of Kinnick Stadium. An honorable mention go to Goldy Gopher from the University of Minnesota, who drives around in a toy car and attempts to dunk a basketball with moderate success.

While you’re watching, see how many colleges you can identify by their emblematic costumed creatures. There are at least two I missed.