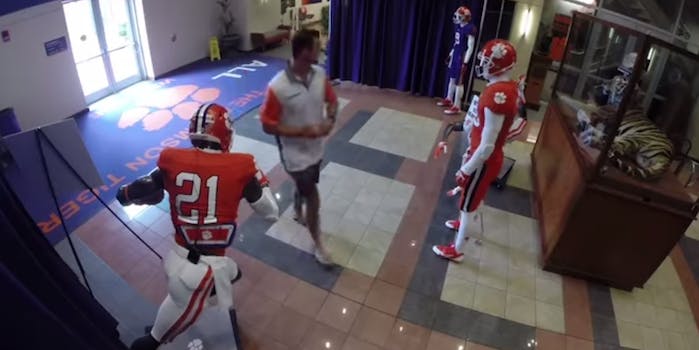 Admit it: You'd scream too.

Call it a different variation of the “quarterback sneak”: A Clemson University football player decided to have some fun with people on campus by posing as a mannequin—and then scaring their jerseys off.

Quarterback Cole Stoudt donned his bright orange-and-white football uniform and took his place amongst a group of similarly-dressed mannequins in the WestZone area of the university’s Memorial Stadium. When unsuspecting people got a little too close, he came to life.

Reactions naturally ranged from fright to laughter. One person even slapped him. No matter the reaction, it is obvious that Stoudt is immensely enjoying his handiwork.

The video has proved wildly popular on YouTube, with over 617,000 views. To put it in perspective, this could fill Memorial Stadium approximately seven times over.

If Clemson Football ever has a problem with attendance at its games, perhaps it should consider kicking things off with Stoudt’s prank.