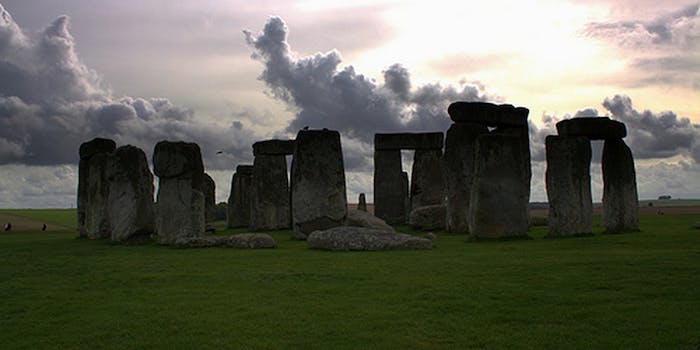 A code dump may reveal Stonehenge

When redditors discover some mysterious code on the site, they get cracking.

In July, we chronicled the case of r/A858DE45F56D9BC9, a section on Reddit that appeared to be a kind of bizarre code dump.

The section attracted the full attention of the social news site and even got picked up by Boing Boing’s Cory Doctorow. Hundreds — probably thousands — of redditors jumped into the section, racking their brains in an attempt to decipher the puzzle.

Then, as the attention reached its apex, the section’s creator (the eponymous A858DE45F56D9BC9) turned it private. The code hunting ended as quickly as it began.

Few realized the section quietly reopened a few days later.  A858DE45F56D9BC9 began posting again. A small group of redditors dogged every one of the posts. Late last week, Redditor fragglet did something he said was “was basically fairly trivial and obvious for any experienced programmer.”

He decoded one of the posts.

What did he find?

An image of Stonehenge, drawn in ASCII art (below).

How did he do it?

This is what he told us:

“The stuff that is posted on there is hexadecimal-encoded data, so in theory it can contain any file you might have on your hard disk. A few weeks ago there were some .gif files posted with messages hidden inside them using steganography. From memory, these included a shortened URL and the name of a standard for data encryption. For the post that drew attention, the file was Base64-encoded. So essentially it was two levels of encoding before you got to the real message, which was an ASCII art picture of Stonehenge.”

(In fact, it seems the Stonehenge image may have been a message to A858DE45F56D9BC9’s followers. According to fragglet, in a separate comment thread one of them had called r/A858DE45F56D9BC9 the “Stonehenge of Reddit.”)

But most people probably care less about the how than the why than what was the purpose of it all?

There were dozens of posts in the subreddit. A858DE45F56D9BC9’s followers cracked the code of only a few. Maybe the posts were a series of images, all linked to together by a single purpose? Or maybe it was just a game.

Or maybe it was nothing special at all.

As one redditor said in another thread on the site:

“Looks like it’s just a random redditor getting his kicks watching people try to figure out the code.”

He may be. But he’s getting his kicks — and entertaining a small legion of followers — who are, meanwhile, expecting the code-deciphering to begin again soon.

As fragglet told the Daily Dot: “Whoever is behind it seems to be rather shy, and periodically deletes all the old posts or closes the subreddit entirely, especially when there’s lots of public attention. I expect it will be back again in a couple of weeks.”