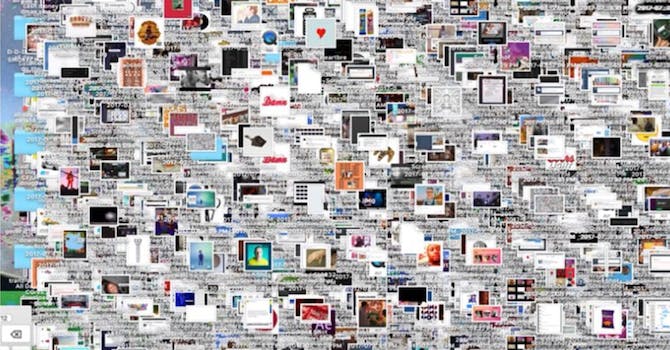 This woman’s overcrowded desktop is haunting the internet

This is absolutely anxiety inducing.

No one knows why Apple sends your screenshots to your laptop’s desktop, but thanks to some decision high up in corporate, these files have been cluttering our computers ever since. A mere 80 or so will fill up every available slot, and then they start clustering into piles and piles and piles of ever increasing size, constantly encroaching on your sanity.

Every day, Carley texts me a screenshot of her desktop and every day, it gets worse. pic.twitter.com/N26KKKo06t

The original tweet come from Aida, whose friend Carley has been trolling her for a week straight with these screengrabs. Carley knows Aida—like most of us—can barely handle an extra 100 files on our desktop, let alone… Look I’m not even sure God knows how many files are on Carley’s.

“It’s been about a week,” Aida told the Daily Dot of her ataxophobia-inducing messages from Carley. “She set up a Google calendar alert that reminds her to message me every day with a new screenshot. The duration is set for about 2 weeks. She knows it makes me uncomfortable. My desktop is very clean and looking at hers makes my skin crawl.”

Unfortunately for Aida, tweeting out the pictures of a desktop that would make Marie Kondo commit Hari Kari had the opposite effect of stress relief. Now, people are sending her pictures of the disasters on their own computers.

And here I thought my desktop was bad pic.twitter.com/veqDk9xkWN

My screen used to be so bad, so I created a "help" folder, so if i take 50,000 screenshots, I just send them to that folder. Only issue now+ pic.twitter.com/Igofibv9Bo

Aida’s life is downright being ruined.

“It’s affecting my sleep. I can’t sleep anymore,” she wrote. “There’s just unnecessary files everywhere, with no real home. I want it to stop.”

She is inspired, however, by other people’s anger.

The angry and disgruntled reactions to this make me whole.

Some people have even been inspired to improve their life thanks to Aida’s struggle with Carley.

even better, i just organized my files pic.twitter.com/g1fmWm2lE0

As for her own desktop, Aida says it’s clean as they come. “My desktop is very clean. Anything I’m not sure where to put goes into a folder called ‘screenshots and drama.'”

Even Carley has committed to keeping things somewhat more orderly after having been outed.

When asked how she lives with herself, Carley said that it is a “system only she understands” and that it works for her.

She wanted to add that, “This is really bothering people and I’m just drinking my iced tea.”