We spoke with associate editor Daniel Kibblesmith about why a site like Clickhole needs to exist in 2014.

The thing about being a comedian is that you always have to have something to make fun of. But what happens when people stop caring about the thing you’re mocking?

The Onion has been lampooning print media for 26 years. In 2014, the audience for ink-and-paper news is shrinking rapidly, and no comedian wants to be the guy with the tired bad-airline-food routine. So Onion Inc. made the decision to shift its satirical target to how people interact with content on the Web, parodying sites like BuzzFeed, Upworthy, and the Huffington Post.

It’s with these sites in mind that Clickhole debuted last Thursday. I spoke with associate editor Daniel Kibblesmith about why a site like Clickhole needs to exist in 2014.

What was the motivation at the Onion for starting Clickhole?

The motivation for Clickhole really was external because the media landscape has shifted so much since the Onion set its course. And when you’re satirizing media, you also have to keep up with it. Fortunately for the Onion, in some ways new media got so dumb that there was a wealth of opportunities to make jokes about it.

So in the same way that cable news became a dominating voice, and the Onion responded with the Onion News Network, Clickhole is our outlet for satirizing what’s become the new media.

BuzzFeed is an obvious comparison, but we’re just as excited about exploring the tropes that fuel the Huffington Post or even something like Gawker in order to take a fresh look at some of the things that have become so ubiquitous on our Facebook wall that we end up taking them for granted without realizing how kind of ugly and baffling they can be.

Was the decision to make Clickhole, like, “Hey, here’s some more stuff we can make fun of? Or was it, “We need to start something like Clickhole in order to continue to be relevant?”

I’d say it’s the former, because it’s certainly not replacing the Onion or the Onion News Network any more than the Huffington Post has replaced the New York Times.

I think it was genuinely a very organic process of finding that a lot of these things felt like they had a natural fit on the Onion, but [some of it] felt like a reach. Like in order to really hit the targets like Upworthy, you would need a website that hosted videos like Upworthy.

They say good satire has to be pissed-off. What is it about clickbait that really gets your goat?

One thing I should add to the list is Upworthy, who is probably the most egregious offender in the pure, bait-and-switch headline tactic. Or the manipulative cliffhanger headline construction, where it’s so unapologetically cloying that it just forces this question into your head where you almost don’t have a choice.

And I think that’s a great microcosm for how manipulating these things are. And when you are that manipulating, it could be argued that you’re compensating for the hollowness of your content.

Even calling it content instead of news or articles shows how far we are down the path of accepting this as some kind of replacement for journalism. Which I think everybody agrees is disappointing. That’s one of the reasons that the response to Clickhole has been so positive. Immediately upon announcing it, there was this sort of shared catharsis where I think people realized that a voice that they trusted in the Onion was going to finally openly acknowledge that these things have become something of a plague. I don’t remember how cunningly they sort of seeped into our daily consumption.

Exactly. It’d be generous to say that we’re satirizing journalism. We’d have to call it journalism in order to satirize it in that regard. It’s more like a retail organization than it is news. And that’s the sort of thing that fortunately so far has been very easy to make fun of.

Clickbait is by nature very shallow. Do you worry about making sure that satirizing the disposable doesn’t itself become disposable?

It’s something that we talk about a lot. The answer to that is that we’re hoping to present a satirization that is true to the source material. In the same way BuzzFeed or even something community-driven like Reddit or Tumblr can talk about a mass shooting with the same gravitas that they talk about Batman casting. That in itself is a deep way to look at shallowness.

It helps that we’re growing alongside the things we’re hoping to parody. Because BuzzFeed will, in a frivolous way, use animated GIFs from Jurassic Park to talk about the conflict in Syria. In some ways, they are tackling news, and that frees us up to talk about news in a way that is still on the Clickhole target.

It’s conceivable. Our goal and in some ways our job is to reflect the real-world media equivalent. If BuzzFeed ultimately does overshadow the things that look more like traditional newspapers, I think it’ll be smart and necessary and also fun to divert more of our resources to growing in that direction. That’s the crazy thing about satire. In some ways, we have to be ahead of the curve while at the same always playing catch-up. We have to mirror reality, so that we can be our disturbing parallel version of it. 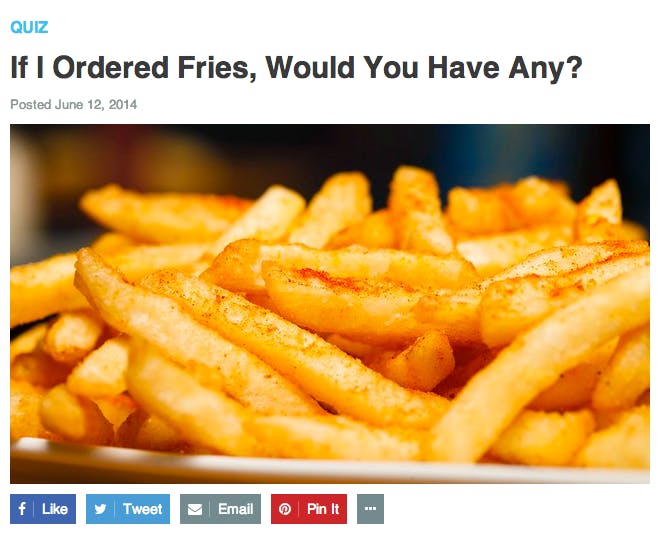 [Clickhole] is a parody of Internet culture itself, in the same way that the Daily Dot is a publication about Internet culture itself. [Editor’s note: Kibblesmith is a former contributor.] That’s the lens through which this satire is viewed. So as long as there is the Internet, and there’s stuff to comment about the Internet, I believe some version of Clickhole exists. So if clickbait isn’t the future, I believe we’ll course correct so we can find the things that are funny and objectionable about the future of the Internet and make fun of those instead.