Also compromised was the account of one of the site's former writers, now with Wired. 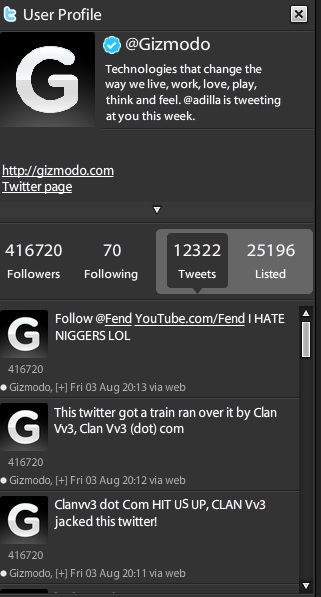 While Gizmodo seems to have regained control of its account, which has 416,000 followers, Honan’s still appears to be in the hands of Clan Vv3.

The hackers went on to post the home address of YouTuber Insomniac_03 and linked to a YouTube account where video evidence of the Gizmodo and Honan hacks was posted.

Other tweets posted on Honan’s account extended an invite to play XBox Live.

Clan Vv3 has taken over a number of fairly prominent Twitter accounts in recent months, including those of NBC sitcom star Whitney Cummings and former WWE wrestler Booker T.

In a coincidental twist, the last tweet posted by Gizmodo before the hack was a link to a story titled “How To Defeat Your Enemies on the Internet.”