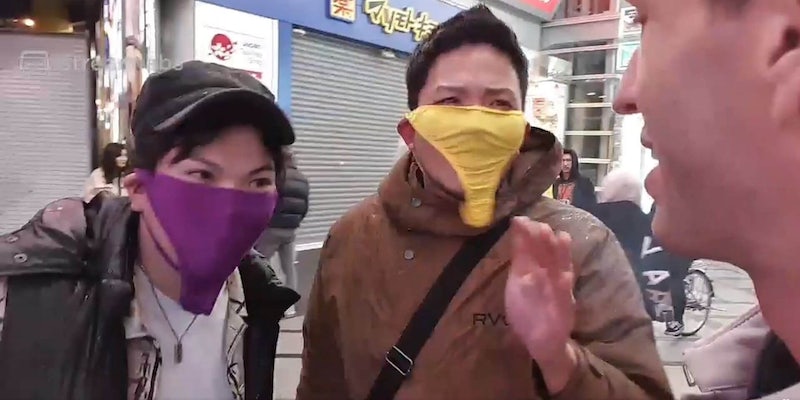 This is either ridiculously smart or tragically stupid.

With face masks that supposedly protect from coronavirus in short supply around the globe, some men in Japan are trying out another idea: Wearing women’s underwear over their faces instead.

Twitch streamer Cjaysan discovered that when, while visiting Japan, a couple of men walked up to him with newly purchased underwear covering their noses and mouths.

Cjay was speaking with a man who was smoking a cigarette on a bike about how they like to dance when a dude wearing yellow fabric on his face approached him as he streamed.

“What is that?” Cjay asked, referring to the makeshift mask.

“Panty,” the man replied. “This is panties.”

“Where did you get that?” Cjay, who has about 63,000 Twitch followers, said. “Is that from your girlfriend?”

“No. No girlfriend,” the man said.

“Is that your mask?”

The man and a friend who had purple underwear on his face confirmed that was the case and that they were wearing it to stop coronavirus from infecting them.

Though face masks have become a popular item in the wake of the fast-spreading virus, the World Health Organization (WHO) has said that it’s not necessary to wear one if you’re healthy (unless you’re taking care of somebody who might have the infection) but to put one on if you are coughing or sneezing.

Surprisingly, the WHO has said nothing about wearing women’s underwear on your face instead. But it seems unlikely to help.

As the Gamer points out, though, the Philippines government suggested wearing diapers, bras, or underwear if citizens couldn’t procure an N95 face mask last January when the Mount Taal volcano erupted and ash was spread into the air.

If, however, you’re desperate for a nose and mouth covering and decide paying money for a panty face mask is a good idea, there is a website where you can buy such garments called the Pantsu Mask—which “is literally meant to resemble a pair of panties, which you ‘wear’ just like regular facial mask to keep germs from spreading. Handmade in cotton, the design is also reversible so you can wear stripes or polka-dots, depending on your mood.”

Unfortunately for anybody who’s interested, the product is currently sold out.