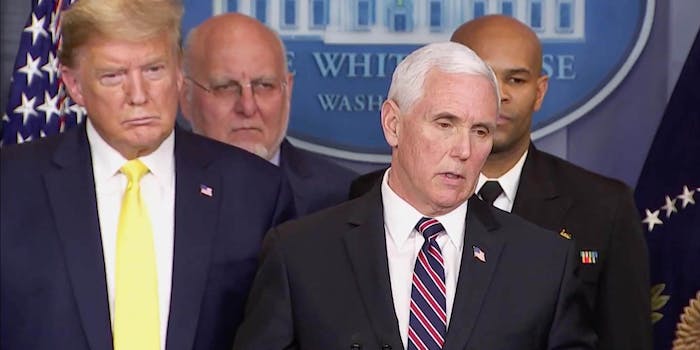 President Donald Trump refused to answer questions from the media on Monday over whether he has been tested for the coronavirus.

Speaking at the White House alongside Vice President Mike Pence and members of the Coronavirus Task Force, the president discussed potential payroll tax cuts and aid for hourly workers who may be affected by the outbreak.

At the end of his speech, Trump left the press briefing room as reporters repeatedly asked whether he had been tested.

Although Trump attended the event, he is not believed to have interacted with the sick individual. Numerous people who did come into contact with the ill person, however, have since had contact with the president.

Since the political conference took place, four GOP congressman have placed themselves under quarantine. Among the four, Rep. Matt Gaetz (R-Fla.) came into contact with Trump just today and even traveled on Air Force One.

While none of the congressman have reported experiencing symptoms, questions remain as to what precautions the president has taken.

After failing to receive an answer from Trump, reporters turned their sights on the vice president in an effort to learn whether the commander-in-chief had been tested.

Pence confirmed that he himself had not been tested and was unaware as to whether Trump had been either.

The vice president went on to claim that an answer would be provided by the evening.

“I honestly don’t know,” Pence said. “We will get you an answer from the White House physician very quickly.”

The Trump Administration has been criticized for its response to the coronavirus, particularly in regards to the lack of testing.

On Monday the Centers for Disease Control and Prevention (CDC) stated that 75,000 lab kits had finally been made available for all 50 states to carry out tests for the illness. The latest numbers indicate 605 confirmed cases in the U.S. with 22 deaths attributed to the disease.