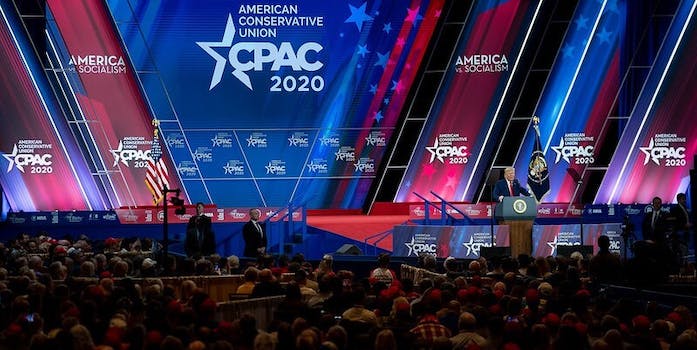 Who was CPAC’s coronavirus ‘patient zero’?

There are some interesting theories.

On Monday, a slate of Republican lawmakers announced they were self-quarantining as a result of possible exposure to coronavirus at the Conservative Political Action Conference (CPAC).

CPAC is the largest annual gathering of conservatives and is attended by almost every big name in the movement. This year’s conference attendees included President Donald Trump, meme-maker Carpe Donktum, Charlie Kirk, and Diamond and Silk.

News of an infected person at CPAC convinced right-wingers that coronavirus was not a hoax propagated by Democrats to harm the president but a verifiable illness. And now, everyone wants to know who the patient zero was.

Conservatives are demanding answers themselves, as they were possibly exposed. Meanwhile, liberals are turning it into a guessing game.

Was it former White House chief of staff Mick Mulvaney, who was spotted hacking on stage?

At CPAC, Mulvaney called coverage of the coronavirus an attempt to take down Trump’s presidency.

But could it have been Turning Point USA’s Benny Johnson, who has a history of virality that originated elsewhere?

Could it possibly have been CPAC organizer himself, Matt Schlapp?

But Schlapp is being criticized for refusing to provide the name of the possible attendee and pushing incorrect information on Twitter.

That’s lack of information on who may have spread the virus is being presented in stark contrast to Republicans’, let’s just say, enthusiasm during Trump’s impeachment trial to get the name of the Ukraine whistleblower out in the media.

And according to Politico, CPAC refused to tell rank-and-file conference-goers who the infected attendee was, but VIPs were given the information.

Writers at the Daily Mail, though, think they’ve identified patient zero: A doctor in New York who is a prominent bundler for Cruz is currently in self-quarantine after testing positive.

Cruz was the first CPAC attendee to tweet he was taking precautionary measures.

You can read the Daily Mail’s report here.