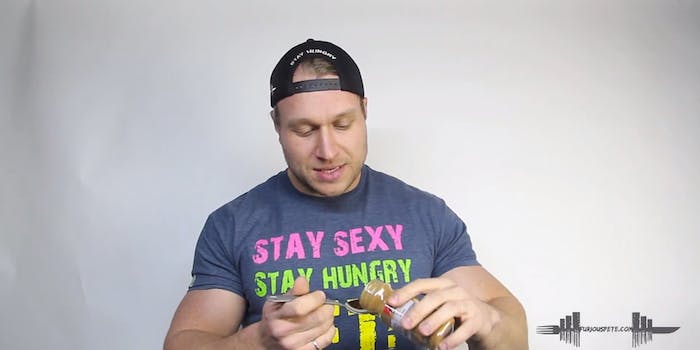 If all the “Cinnamon Challenge” videos didn’t do it, this just might convince you to never eat cinnamon again.

I did the Cinnamon Challenge when I was 17, and it was a stupid, horrible decision that resulted in almost vomiting on a friend’s front lawn on New Year’s Eve and a lifelong intolerance for cinnamon. And as I learned years later once the trend got popular on YouTube, it was also dangerous.

So when I came across professional competitive eater Peter Czerwinski (aka “Furious Pete”) taking on an entire bottle of the stuff, I couldn’t help but cringe and lose my appetite.

One tablespoon of cinnamon is simple enough for this pro to handle, but when tasked with consuming 125 grams of it, even he had his breaking point.

“I don’t know if this is a good idea,” he said after it lodged up his nose.

Just take his word for it.