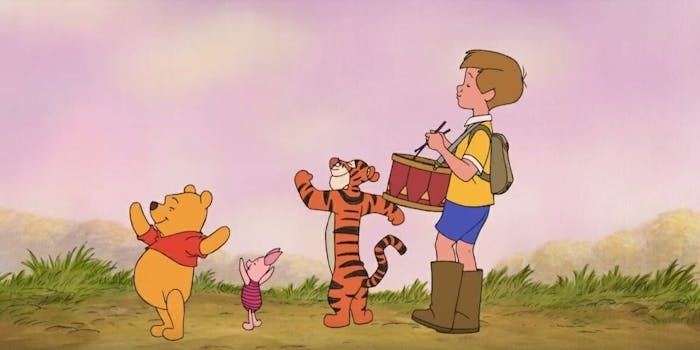 Oh, bother. With the release of Christopher Robin, a charming tale of an adult version of Winnie the Pooh’s best friend, Disney seemed on the verge of successfully kicking off its latest live-action remake trend. Not so in China, where President Xi Jinping is a bit prejudiced against good ol’ Pooh Bear. The Disney film has been banned in China after comparisons between President Xi and Winnie the Pooh took off on social media.

The image depicts Xi walking along with President Barack Obama, comparing the two to Winnie the Pooh and Tigger, respectively.

With Xi being particularly tough with state censorship, the image of Winnie the Pooh was quickly banned from all Chinese media and social media. When users tried to upload images of Pooh, they received a “content is illegal” message. Images of the bear were also removed from WeChat, a popular Chinese social media messaging app.

Trending on Weibo: Abe as Eeyore and Xi as a smug Pooh #APEC pic.twitter.com/lx53FzkVzu

Most recently John Oliver’s show Last Week Tonight was banned in June for sharing the same image and commenting on Xi’s likeness. To be fair, Oliver said, “I’m not even sure it’s that strong a resemblance to be honest, but the fact he’s annoyed about it will never stop bringing it up.”

The word “Disney” is also banned in China, according to a Business Insider report—which is strange considering Shanghai Disney Resort is a thing.

“Historically, two things have been not allowed: political organizing and political action,” Qiao Mu, assistant professor of media at Beijing Foreign Studies University, told the Financial Times, “But this year a third has been added to the list: Talking about the president.”