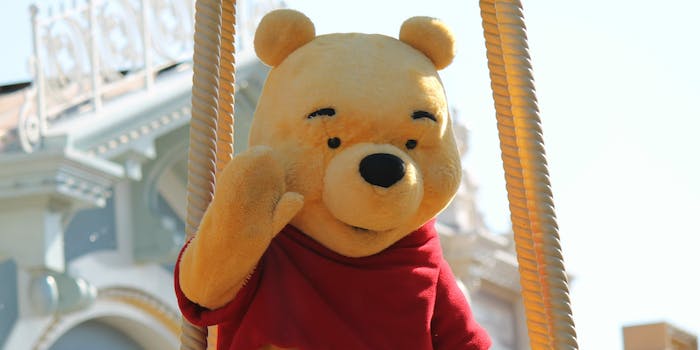 Winnie the Pooh is now banned in China

Can Piglet be far behind?

Winnie the Pooh has joined The Big Bang Theory and an ever-growing list of fictional works to be banned by the Chinese government.

There was no official reason given for the ban but, according to the Financial Times, attempts to post the Chinese characters for Winnie the Pooh to Sina Weibo (the Chinese equivalent of Twitter) were returned with a message reading, “Content is illegal.” Images of the bear were also removed from WeChat, a Chinese social media/messaging app.

One possible reason for the ban could be a 2013 meme that compared Chinese President Xi Jinping walking with President Barack Obama to a picture of Pooh walking hand-in-hand with his pal Tigger.

The comparison cropped up again when Xi met with Japanese Prime Minister Shinzo Abe in 2014.

According to the Daily Mail, those images were removed at the time, but it wasn’t until now that the cartoon bear was totally banned from Chinese media. Pooh’s blacklisting is likely part of a crackdown leading up to this Fall’s Communist Party Congress, an event that takes place once every five years where key political appointments are announced.

“Historically, two things have been not allowed: political organising and political action,” Qiao Mu, assistant professor of media at Beijing Foreign Studies University told the Financial Times, “But this year a third has been added to the list: talking about the president.”