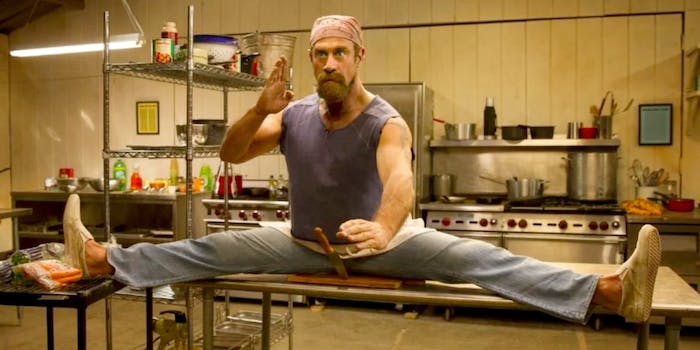 At 60-years-old, Christopher Meloni proved that he’s more beefcake than ever in a steamy Polaroid-style photoshoot with Interview magazine that dropped on June 9. In the photos, the Law & Order star—who is widely known for having the chiseled derriere of a Greek god—appears in crop tops and tank tops, pumping a dumbbell and chomping on a slice of pizza.

“This is what has happened. “I’ve been blessed with glutes that have an attractive shape,” Meloni told the publication. “But I have a trainer, and we’re going through bodybuilding phases, and where everyone kind of caught me was that I’d been preparing for one year in a very high-intensity weight training program that actually focused on legs.”

“So I guess you could argue that the glute-peeping public are now reaping the benefits of all that hard work,” he added.

And are we! Back in April, Meloni went viral when he was spotted on the set of his franchise spin-off, Law & Order: Organized Crime, looking like he had two Christmas hams shoved down the back of his pants. And now, with the latest photos making their way around the internet, people just can’t get enough Meloni. “I’m going absolutely feral,” exclaimed one Twitter user in all-caps.

Others zeroed in on one specific photo from the shoot, in which Meloni looks commanding while dressed in a Kelly green tank, form-fitting hot pink slacks, and aviator shades. The image became a meme as Twitter users compared him to watermelon, bubble gum, and a tube of Maybelline Great Lash mascara.

One user even painted the photo of Christopher Meloni for posterity.

Lest anyone fault the internet for objectifying Meloni; the guy seems to take it in stride. When asked in the same interview what he thinks of his “zaddy” status—defined by Urban Dictionary as “a fine, handsome, and sexy ass intelligent man that makes you smile and drip every time you see him,” and who “knows how to handle business in and out of the bedroom”—Meloni was likewise nonplussed.

The Jennifer Lopez and Ben Affleck kiss is a perfect meme template, naturally

Batman is embroiled in an oral sex controversy