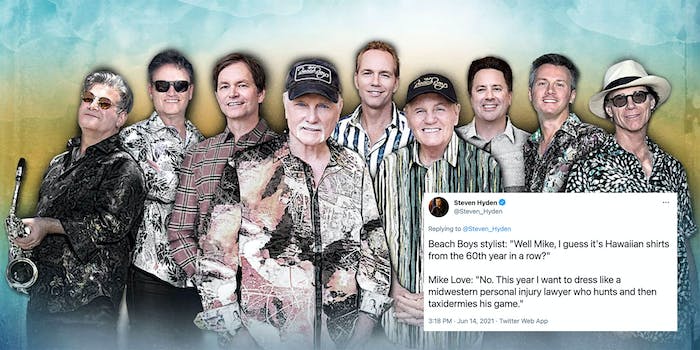 A Monday afternoon tweet announcing the Beach Boys’ upcoming October concert in Tuscaloosa, Alabama—notably, the Mike Love edition of the beloved oldies band—became an occasion for a number of people on Twitter to come together to drag Mike Love.

Brian Wilson, in particular, is considered by many fans to be the creative mastermind of the group, and his lack of involvement with Love’s touring band disqualifies it as authentic for a number of fans.

In fact, as this quote tweet indicates, Wilson has already disavowed the Love-led Beach Boys on at least one prior occasion: when that version of the group performed at a California fundraiser for then-President Donald Trump’s failed reelection bid.

Love’s Beach Boys also co-headlined last New Year’s Eve party with Vanilla Ice at Mar-a-Lago, attended by Donald Trump, Jr. and Kimberly Guilfoyle but not Trump himself. That party, less than a week before the Jan. 6 Capitol riots, happened while Trump was still contesting the election results nearly two months prior.

Mrs. Doubtfire screenwriter Randi Mayem Singer, commenting on the largely-absent COVID-19 precautions at the event, observed, “Imagine risking your life to dance badly to Vanilla Ice and one Beach Boy.”

The announcement allowed people with an ongoing disdain for Love to make their feelings known.

Indeed, as one person conveyed, his anti-Mike Love sentiment went from something screamed “at VH1 Classics in our living room” to a song to a set of buttons making clear who they consider to be legitimate Beach Boys.

This familiar meme appropriate pictures of the band during its heyday more than half a century ago.

But even those who weren’t alive when the Beach Boys were first charting found reasons to get in on the fun. For instance, more than one person, including Pete Croatto, noticed one touring band member’s striking resemblance to Rudy Giuliani.

Others mocked them for the vibes their sartorial choices gave off.

One observer, music critic Steven Hyden, imagined a conversation between the band’s stylist and Love, with the stylist asking, “Well, Mike, I guess it’s Hawaiian shirts from the 60th year in a row?”

“No,” Hyden had Love reply. “This year I want to dress like a midwestern personal injury lawyer who hunts and then taxidermies his game.”

Another cracked, “Mike Love and the “Beach Boys” are here to sell you a timeshare in northern Florida.”

Comedian Jenny Johnson went in with, “Mike Love and The Beach Boys’ new poster looks like their tour will be called Absentee Fathers.”

And Twitter user @victorkiam simply declared, “Mike Love may be the virus that needs to be contained at this point.”