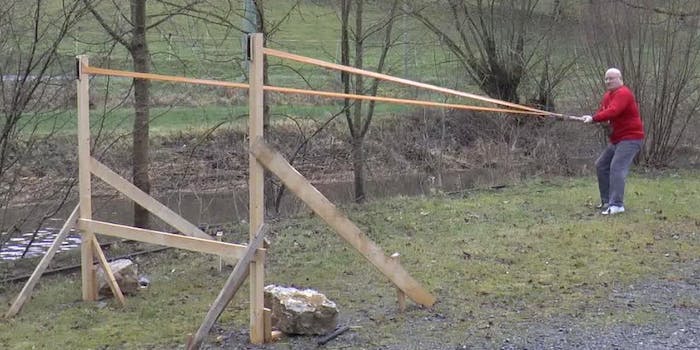 Watch this madman launch a Christmas tree from a massive slingshot

This bad boy could shoot Santa's sleigh right out of the sky.

From Krampus to caroling, Germany is a land replete with wild and wonderful Christmas customs. Now, thanks to Joerg Sprave, the fine folks of Deutschland have another holiday tradition to add to the list: seasonal slingshotting.

The man responsible for YouTube’s popular Slingshot Channel has gotten in the Christmas spirit, but not in your typical fashion. Rather than decorating a freshly cut spruce or fir with ornaments and lights in anticipation of Santa, Sprave has turned a typical Christmas tree into a spear that could take Claus’s sleigh right out of the sky.

After he trimmed his tree into a lean, mean seasonal spear, he took aim at an olden wooden door and fired away with “The Santa Slayer 2014.”

Let’s just hope you’ve been a good boy or girl this year, because you definitely don’t want to be on the wrong end of this Christmas tree.