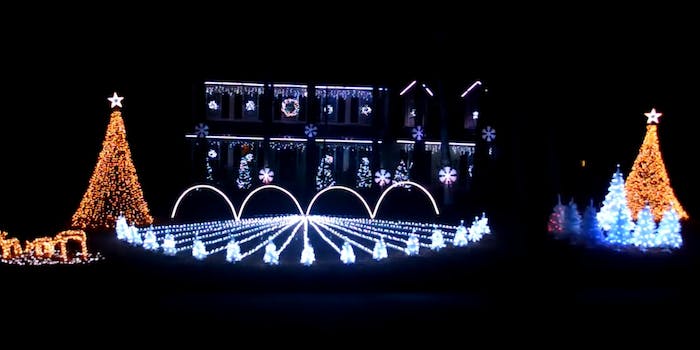 Few things are more annoying than having a neighbor with an obnoxious lights display during the holiday season.

But we think we’ve found something even worse: Living next to these guys if you’re a fan of the Crimson Tide or the Bulldogs.

If you’re a football fan, you’ve probably heard about the once-in-a-lifetime full-field touchdown run that Chris Davis scored for Auburn University in this year’s Iron Bowl. Davis ran a miraculous 109 yards on a failed Alabama field goal attempt all the way to the Auburn end zone. The incredible run led the #4-ranked Auburn Tigers to a 34-28 defeat over the #1-ranked Tide and secured them a place in the college football

If you haven’t seen it, it’s about as jaw-dropping as sports moments get:

It’s no surprise that Auburn fans are still celebrating the play. But one festive family has gone a step further, working Davis’ miracle run into their annual Christmas lights show.

For years the Burton family, who live south of Fayetteville, Ga., have put on an elaborate light show for neighbors and passersby. In 2009 they added coordinated music and lights, turning their Christmas spectacular into a scheduled show that invites viewers to bring donations for Toys for Tots in exchange. The show includes a variety of holiday music and choreographed lights. Oh, and there’s one for Halloween, too.

This year, though, the Burton residence got a little creative with their choice of theme music: They went with the Auburn marching band performing the university’s fight song, “War Eagles” (because “Fight on, Tigers” isn’t enough syllables, apparently). The display opens with a replay of the miracle touchdown, featuring audio by Rod Bramblett, the commentator for the Auburn Tigers’ radio. Bramblett’s excitement plus a thousand glimmering Christmas lights equals something approaching delirium. Here they are, pulsing like the hearts of a stadium full of football fans:

Davis’ historic run came just moments after Auburn had scored a desperate touchdown to tie the game at 28-28, all within the game’s final half-minute. And it’s not the only unbelievable miracle play Auburn has pulled off this season. Just two weeks before the Alabama game, Davis sent a winning fourth-down pass to Ricardo Louis with just 25 seconds on the clock, pulling out a 43-38 defeat against their bitter rival, the University of Georgia bulldogs. That one’s pretty spectacular, too:

It’s a great time to be an Auburn fan. But if you’re a fan of any of those other Southern states and you’re living in the Burtons’ subdivision, we don’t envy you.

It can’t be fun to have the reminder of your loss displayed all over the neighborhood at full volume and in living color.

But at least it’s one of the most memorable light displays we’ve ever seen—almost as memorable as the touchdown they’ll still be talking about next Christmas.