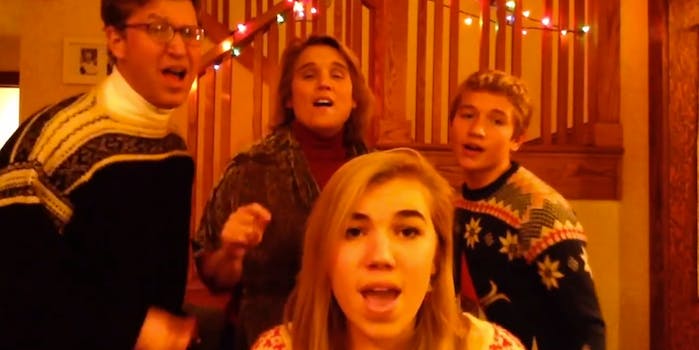 The Holderness family took the Internet by storm this week with their hilarious Christmas card rap video, racking up millions of YouTube views, but now they’ve got some competition. Meet the Bock family, who joined in on the musical fun with the unlikeliest of Santa’s helpers: Miley Cyrus.

It’s a clever arrangement that gives a new twist to a song many are already tired of hearing. Plus, the family’s enthusiasm as they dance in their Christmas sweaters just sells it.

Postmodern Jukebox’s sensational Scott Bradlee is already a huge fan of this family.

“Your entire family is amazing,” Bradlee wrote in the comments. “This just put the hugest smile on my face. You even nailed the key change!! and while wearing fly holiday sweaters, no less. I want to come jam with you guys.”

They want to have as much eggnog, holly, presents, and figgy pudding as they want, and who can argue with that?

After all, they’re just being jolly.