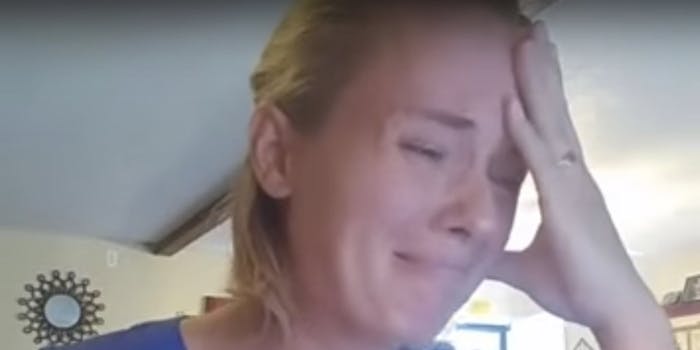 What kind of a god would let this happen?

With all the white people upset about the NFL’s Colin Kaepernick protesting racial injustice by taking a knee during the national anthem, you may be wondering what songs they take issue with these days.

Wonder no more: The most offensive song in recording history is… “Norf Norf,” the grimy trap single off Vince Staples’ Summertime ’06. To be clear, the track reflecting on Staples’ home turf (the north side of Long Beach, California) dropped last year. But one Christian mother of four hadn’t heard it until just a few weeks ago, and she couldn’t believe her ears.

At the beginning of her 11-minute rant, which is punctuated by frequent crying and the noise of an ignored toddler playing in the background, our morally upstanding hero explains that she encountered the censored version of “Norf Norf” by accident on the radio—even though she usually listens to the Christian station instead. After expressing nostalgia for the days when wholesome white pop from Britney Spears and the Backstreet Boys ruled the airwaves, she gets to the heart of the matter: Staples’ lyrics, which she attempts to read—including all those naughty swears and copious use of the N-word—through her furious, hopeless tears.

The video has been around for a while but just today got traction on Twitter, where it was mocked about as gleefully as you’d expect/hope.

Yo @vincestaples you see this yet? Never seen someone so distraught over a song before lol pic.twitter.com/jkLfICHwby

if its so bad why is she reading the lyrics while her kid is in the back?

Inevitably, someone went ahead and edited the dramatic reading to match up with the insidious original beat from producer Clams Casino.

The lesson from all this, according to mom? “We need to pray” for our children, she says. (Particularly her 11-year-old, whom she mentions is now banned from listening to Top 40 radio). But, as Genius points out, she might do better to “follow Vince’s lead and donate to the YMCA in Long Beach so kids like Vince can find better things to do than start gangbanging.” Or at least try to empathize with other people’s experience!

Till then, I guess just keep crying about the scary black music.