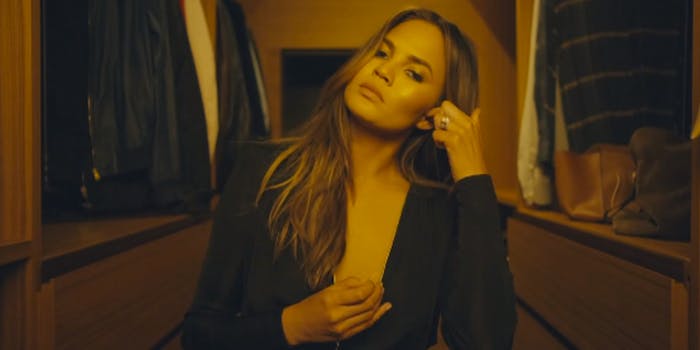 And Rosie O'Donnell stepped up to defend her.

Model Chrissy Teigen spent two days being inundated with death and rape threats after making a controversial series of tweets supporting gun control. Now, in the wake of her departure from Twitter, Rosie O’Donnell is facing similar backlash for defending her.

After calling for Twitter to “step their game up,” noted supermodel Chrissy Teigen fled Twitter Thursday after receiving a flood of harassment.

Teigen came under fire from Americans and Canadians after tweeting the following series of tweets on Wednesday, in the wake of the Ottawa Parliament shooting that left two people dead.

active shooting in Canada, or as we call it in america, wednesday

Sorry you don’t understand that is a knock at america and our issues with gun control. No one is minimizing the Ottawa shooting.

Teigen was barraged with criticism following her tweets, and spent the remainder of Wednesday and Thursday sharing them as an example of the kinds of abuse that Twitter’s notoriously lax policies allow.

and this is where @twitter needs to step their game up. pic.twitter.com/oGmTXgEwdL

“Amazing this isn’t punishable,” she wrote, citing an especially egregious non-specific death threat. After putting up with the toxic atmosphere through Thursday, Teigen announced she was bidding her half a million followers farewell:

From the reactions Teigen shared and responded to before leaving, it seemed that many people misunderstood or misread her tweets as a criticism of Canadian gun control. That wasn’t the case, as Rosie O’Donnell pointed out on Thursday’s episode of The View, which had a segment where the hosts dissected her meaning.

“[I]n America, this happens on a daily basis and we don’t even pay attention anymore,” O’Donnell explained.

Gun control dissenters characterized her comments as a “new low,” with many people feeling she was exploiting a Canadian tragedy that couldn’t be compared to the U.S.

You’re an idiot @Rosie We live in Canada to be safe & stay away from wreck less Americans. How dare u minimize what we just experienced!

Prior to the View segment on Thursday, O’Donnell recorded a short video, later uploaded to her YouTube channel Ask Rosie, to elaborate about her support of Teigen.

Calling Teigen’s tweet “absolutely courageous, absolutely brilliant, and absolutely true,” O’Donnell said she doesn’t care about the backlash she’s received for supporting her. “It takes courage to talk about the truth. There are so many gun deaths in America… Bravo, Chrissy.”

Though comments on the YouTube channel, which is moderated, were respectful, the reaction on Twitter was once again typical of the more toxic tone often fostered in these kinds of debates: A glance at replies to O’Donnell since the segment show an abundance of fat-shaming comments, gendered insults, and an endless supply of both combined.

Though O’Donnell hasn’t mentioned receiving death threats as Teigen did, the episode is a grim reminder that Twitter’s promised change to its current abuse policies can’t come soon enough.

But to many people, an end to harassment and abuse on Twitter may be the only thing less likely to happen than U.S. gun control reform.