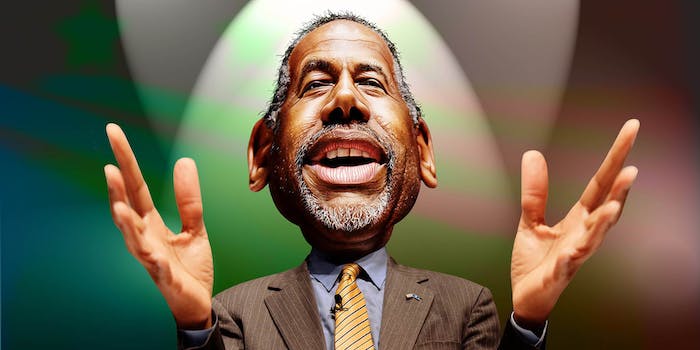 Chris Mintz is an American hero—but can someone tell Ben Carson he shouldn’t have to be?

American heroes shouldn't be risking their lives because the government can't solve our gun problems.

Chris Mintz is an American hero, but he shouldn’t have to be.

When a gunman opened fire at Umpqua Community College in Oregon, Mintz blocked the door to his classroom, charging the shooter and trying to reason with him; the shooting, Mintz told the gunman, was happening on his son’s birthday. A former soldier who served his country for a decade, he took a bullet for his fellow citizens. Mintz was shot seven times, but his actions are credited with saving many other lives. Miraculously, he survived and was just released from the hospital. A GoFundMe page has been set up to help pay for medical costs.

If Chris Mintz represents the best of America, then Ben Carson represents the worst. The Republican presidential candidate and retired neurosurgeon has been harshly criticized on the Internet for his recent comments on gun control. During a Tuesday appearance on Fox & Friends, Carson was asked what he would do in an active shooter situation. Carson responded, “Not only would I probably not cooperate with him, I would not just stand there and let him shoot me. I would say, ‘Hey guys, everybody attack him. He may shoot me, but he can’t get us all.’”

Carson’s comments are an insult to the memories of those who were lost in the Oregon shooting. Leaving aside the fact that organizing a mass resistance in a matter of seconds—minutes, at most—would be difficult, if not impossible, it also brushes aside Mintz’s very real sacrifice. Carson is arguing that if only someone had been brave enough to stand up and try to stop the shooter, maybe it wouldn’t have happened—but he’s ignoring the fact that we shouldn’t be leaving it up to extraordinary citizens to make the difference. Controlling guns is the government’s job—not Chris Mintz’s.

The heroism of individuals can halt a shooting before it occurs—as we saw during the attack on a French train in August. Four men—three Americans and one Brit—managed to subdue a would-be terrorist before he could shoot a single person. Two of these men, though, are in the U.S. military—one of whom had planned to attend Umpqua Community College and only missed the massacre because he’s appearing on Dancing with the Stars.

American soldiers are among the best in the world. They are trained to respond to threats at a moment’s notice. College students are not. Elementary school kids sure as hell aren’t. I highly doubt Adam Lanza would have been deterred from massacring children at Sandy Hook had a second-grade class collectively decided to charge him. But what makes Umpqua unique is that someone—Chris Mintz—did charge the gunman. And the gunman shot him and dozens of others anyway, proving that common sense, and not American bravery, is what is missing in the gun control debate.

I know which one, do you? #BannedBooksWeek #gunsense pic.twitter.com/HJc1yn7ien

But common sense, and for that matter compassion, is not a trait Ben Carson possesses. The night before his appearance on Fox News, Carson took to Facebook to air some pretty heartless—but surprisingly mainstream—views on the Second Amendment. The retired neurosurgeon was participating in a Q&A when someone asked about gun control. “I never saw a body with bullet holes that was more devastating than taking the right to arm ourselves away,” he responded.

The Telegraph columnist Dan Hodges famously tweeted that Sandy Hook was the end of the gun control debate in America, because “once America decided killing children was bearable, it was over.” It was a stark analysis about our level of bloodshed and our collective unwillingness to do anything to stop it. After the last shooting which shocked but didn’t shake America, I wrote that my generation—millennials—are “the most frequent sacrificial lambs on the altar of the Second Amendment.” Never did I imagine that just over a month later a serious contender for the presidency would say, essentially, that he’s OK with that.

Apparently, though, victims of gun violence aren’t worth his time. On the same Fox & Friends appearance in which he said he’d charge the gunman Rambo-style, host Brian Kilmeade asked whether Ben Carson would visit victims’ families like President Obama. “Probably not,” Carson said, adding: “I would go to the next one.”

The next one? There shouldn’t be a next one. Ben Carson has basically conceded that he sees no need to prevent future massacres. Victims themselves, he reasons, can prevent them, and even if they can’t, their lives are not worth nearly as much as his right to own assault weapons without even so much as a mandatory background check.

The gunman shot him and dozens of others anyway, proving that common sense, and not American bravery, is what is missing in the gun control debate.

Carson’s comments are by far the most odious we’ve heard from a candidate in the wake of the Umpqua tragedy, but he’s not the only one that has been remarkably cold-hearted. When asked about his response to the shooting, former Florida governor Jeb Bush simply answered: “Stuff happens.” He added, “There’s always a crisis and the impulse is always to do something and it’s not necessarily the right thing to do.”

However, Bush is ignoring the fact that when it comes to America, it’s the same crisis over and over again. Earlier this month, the BBC reported that there have been 294 American mass shootings this year alone, and 2015 isn’t even over.

Across the aisle, the Democratic candidates are marginally better. Senator Bernie Sanders (I-Vt.) has come under criticism for originally being elected to Congress with NRA support (though he now has a D- rating from the group) and his tepid record on gun control—though he has consistently supported assault weapons bans. This week, former Secretary of State Hillary Clinton rolled out her gun control plan, which pivots to the left of Sanders and includes using executive power to close the “Charleston loophole” by requiring background checks for gun sales and transfers made by private citizens.

Of all the candidates, only former Maryland governor Martin O’Malley (who you may recall is also running for president) pledged to go even further, banning the sale of assault weapons and making gun trafficking a federal crime.

Unfortunately, candidates like Ben Carson have zero interest in reforming America’s gun problem, and instead, they would like to see more heroes like Chris Mintz step up to the plate. However, that’s a ghastly approach. We shouldn’t be encouraging more Americans to stand down shooters. We should be solving our gun crisis so our country doesn’t need them. Stuff happens, but mass shootings don’t have to.