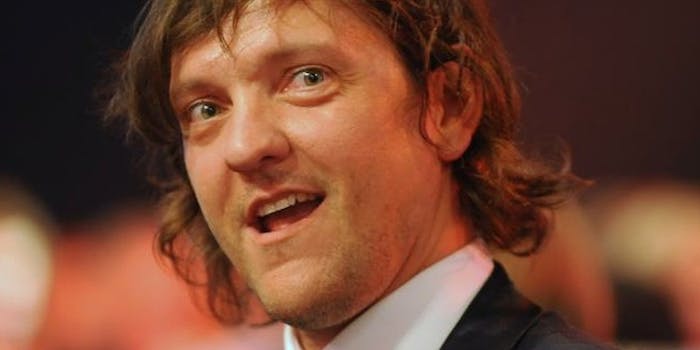 Comedian Chris Lilley not only coined Sneaky Nuts, in which men casually expose themselves in group photos, he helps share the images online.

Last year comedian Chris Lilley created the Sneaky Nuts meme, in which men expose their testicles in group photos, after he mentioned it on his TV show, Angry Boys.

Lilley took to Facebook to share a Sneaky Nuts image sent to him by a fan last week. He was subsequently banned from posting to the social network for 30 days, following a complaint by a fellow user.

The 37-year-old comedian and star of mockumentary series Summer Heights High announced the ban on Twitter, where he encouraged fans to keep up with his exploits there, as well as on Instagram and Tumblr (where he suggested he’d continue posting Sneaky Nuts shots) while his Facebook account is out of commission.

Several of his fans tried to get the hashtag ‪#FreeChrisLilleysNuts‬ trending in support, while others tweeted Sneaky Nuts photos at Lilley, who retweeted some of them.

Lilley appears to have found a loophole. It seems as though he was banned from posting to his Facebook page using his personal account, so he set up an alternative profile until the ban is lifted.

The actor’s decision to set up a second profile may come back to haunt him, however, as that falls foul of Facebook’s Statement of Rights and Responsibilities. Ah, nuts.