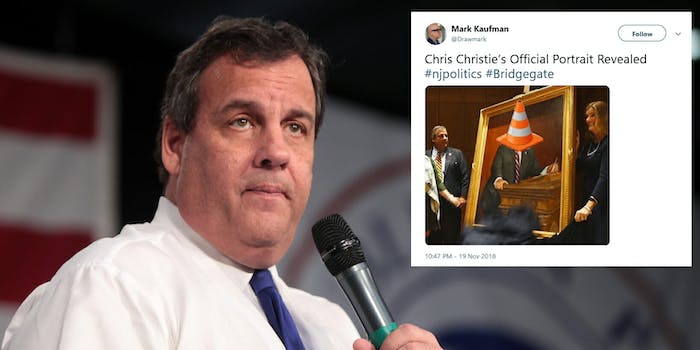 The 'Bridgegate' scandal and Christie's infamous beach photo came up a lot.

Former New Jersey governor Chris Christie had a very expensive official portrait unveiled on Monday, and the internet has a few ideas of what they think it should have depicted instead.

The portrait—which cost $85,000 in taxpayer funds—shows the former governor looking calm and collected while he holds a piece of paper on a podium. The large cost was more than the past three portraits made of New Jersey governors combined, according to the Washington Post.

The painting also has a hidden message, as NorthJersey.com points out, with “STTS” written on it, which stands for “Stronger Than The Storm,” a phrase that was used in the wake of Superstorm Sandy.

However, many people online decided that it was not an accurate depiction of Christie’s time in office, which was mired by the “Bridgegate” scandal and—at the end of his second term as governor— an infamous photograph of him enjoying time at the beach in the midst of a government shutdown (which closed public beaches during the July 4th holiday last year).

Here’s some ideas of what people thought the $85,000 portrait should really show:

As the person who started the Chris Christie in the beach chair meme, I was surprised to see him embrace it for his official portrait. I approve!https://t.co/JmF9lKKfnw pic.twitter.com/kTAgCma88H

The Official Portrait of Former New Jersey Governor Chris Christie has finally be unveiled……………..Think they NAILED it!!!! pic.twitter.com/0DlClw6VJu

Others didn’t create their own portraits, but had some things to say about it.

#ChrisChristie's official portrait to be unveiled Monday night at a private event. If he's holding two ice cream cones, yelling at someone on the boardwalk, only then will it be worth it. @ChrisChristie https://t.co/WsZ07eHReA

Chris Christie's official portrait revealed. Here's what it looks like. https://t.co/pF5BTga4lQ – you were expecting him sitting on a chair on the beach?? – I kinda was pic.twitter.com/E3bUyjS39R

They should have painted him in the tie he has on now @ChrisChristie did you get a choice of portrait ties? https://t.co/v3xPDcFYXv

Last week Christie was mocked for complaining about his commute during a snowstorm that blanketed the northeastern part of the country, which people found to be delightfully ironic.