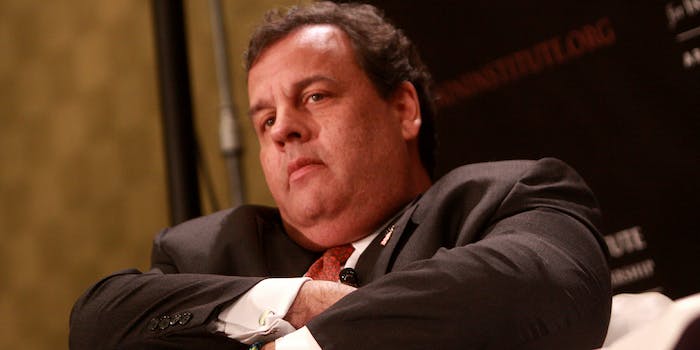 Is it any wonder the New Jersey governor has a 15 percent approval rating?

A government shutdown in New Jersey may have closed state-controlled beaches for millions of people hoping to catch some sun over the holiday weekend, but it didn’t stop Gov. Chris Christie from enjoying the shore.

The Star-Ledger, one of New Jersey’s largest newspapers, snapped a photo of the deeply unpopular Republican governor hanging out with his family on Sunday on Island Beach State Park, a large beach that was closed to the public this weekend as part of the state’s government shutdown—a result of Christie and state lawmakers being unable to reach a consensus on a budget deal.

Christie ordered the government shutdown on Friday, just days before the public beaches and parks were expected to be filled with beachgoers ahead of the July 4th weekend.

Christie, dressed in sandals and T-shirt in the photographs, was photographed by a Ledger photographer who flew on a private plane to snap the pictures of the governor and his family using the popular beach spot while the public was unable to.

.@AndyMills_NJ gets pics of Christie lounging on a state beach closed to the public during government shutdown https://t.co/FVfC5jkCdQ pic.twitter.com/kO1tDjOYM1

When pressed by reporters whether Christie “got any sun” on Sunday, the governor denied it—with his spokesperson later adding that the governor was wearing a hat, so he did not soak up any rays during his beach trip.

Christie said he was spending time with his family at a beach house available for use by New Jersey’s governor.

Much like his friend President Donald Trump, Christie tried the blame-the-media tactic following the photos surfacing of him using a beach that no one else could use because of the government shutdown.

Christie says about @AndyMills_NJ photo today: "The governor's allowed to go to his residence…what a great bit of journalism by the S-L."

More Christie: "I really wonder about journalists who spend money flying planes to look for people where they actually said they'd be."

According to Poynter, shortly after Star-Ledger photographer Andy Mills snapped pictures of Christie, he left the beach to depart for the state capitol to address reporters and work on the government shutdown.

The irony of the governor enjoying time at a beach that had been closed because of a government shutdown he was partly responsible for causing was not lost by people on Twitter.

This photo will be an icon of our timehttps://t.co/h8Z7UX0N9n

Is it any wonder that Christie’s approval rating is at 15 percent?