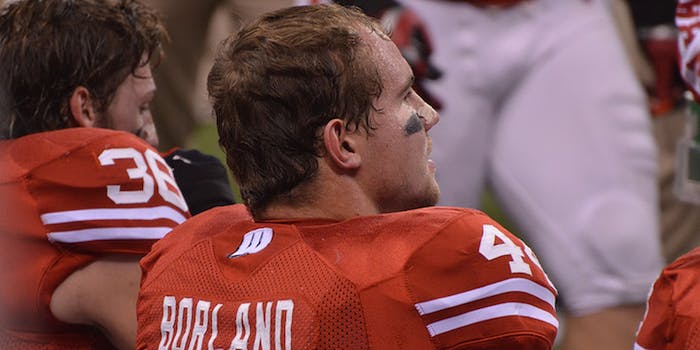 The NFL braces for a firestorm.

Chris Borland—a 49ers linebacker who accumulated 108 tackles and two interceptions in his only season in the NFL—surprised the football world Monday night by telling ESPN that he was retiring because of safety concerns.

“I just honestly want to do what’s best for my health,” Borland told the website. “From what I’ve researched and what I’ve experienced, I don’t think it’s worth the risk.”

Since then, there have been many writers and broadcasters who have opined what Borland’s decision—combined with the early retirements recently of 49ers linebacker Patrick Willis, free agent quarterback Jake Locker, and Steelers linebacker Jason Worilds—means to the NFL and to players who are paying attention more than ever to the recent brain trauma research and the suicides of former stars like Junior Seau (who shot himself in the chest so researchers could study his damaged brain).

“I feel largely the same, as sharp as I’ve ever been. For me, it’s wanting to be proactive,” Borland said. “I’m concerned that if you wait until you have symptoms, it’s too late… There are a lot of unknowns. I can’t claim that X will happen. I just want to live a long, healthy life, and I don’t want to have any neurological diseases or die younger than I would otherwise.”

It’s an unusual point of view—and I write that because most football players would rather not retire so soon into their careers, leaving so much money out of their bank accounts—but Borland’s decision has been well-received by many of his colleagues, some of whom took to Twitter to pen their congratulations.

Got to respect Borland for clearly putting thought into his decision. If you're not 100% committed to this game, better to walk away.

It's extremely difficult when you're living your dream of playing in the NFL as a 20-something to contemplate what life could be like at 50.

they're going to make a 30 for 30 on Borland in the future for spearheading the head trauma issue in the NFL, have 2 respect that decision

Others, though, didn’t necessarily agree with the fanfare surrounding the announcement.

My thoughts as well. RT @Bwagz54: No offense to anyone but I'm playing until I can't anymore. I love this game to much.

The anti-football crowd is loving the Chris Borland retirement. Doing their best to scare moms across the country.

Just to be clear – I'm not criticizing Chris Borland. It's his decision. Good for him. It's the alarmist coverage of it i don't like.

And at least one former player promised to keep tabs on the finances of Borland’s former team.

@RobertKlemko 49ers better not take that man's signing bonus. I'll be keeping an eye on that.

Speaking of which, Borland, after earning $420,000 for the 2014 season along with a signing bonus of about $617,000, is leaving a combined $1.86 million during the next three years of his contract on the table (and, depending on how his career was going, potentially tens of millions of dollars for the rest of his NFL tenure).

Still, that reward didn’t justify the risk in—or of—Borland’s mind. Especially with so many former players who have been diagnosed with chronic traumatic encephalopathy (CTE) after they’ve died, the risk of setting yourself up for that disease makes some current and former player anxious.

It scares the shit out of me when i can't recall a name or forget where i put my keys as we all do. But thoughts of CTE always creep in.

Photo via Steve Schar/Flickr (CC BY 2.0)