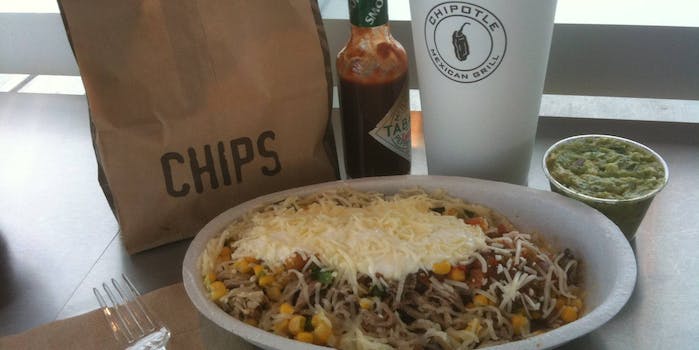 Chipotle, the lackluster burrito chain that stole the good name of a wonderful roasted pepper, has been in the news for some pretty strange reasons. Some of them involve their sick food that literally made people feel ill.

Other times, it’s the love of the fresh ingredients and quality cuisine that—oh, who am I kidding? Some basic bro from the Pacific Northwest is trying to eat Chipotle every day for a year. And he’s almost reached his goal.

On day 300 of the 26-year-old’s trials and tribulations in the face of E. coli, Cunningham penned a Chipotle manifesto on Facebook meant to answer a whole lot of questions about his quest to ingest. The bottom portion is a story of Cunningham overcoming adversity by driving to Canada twice because Chipotle was closed and damn near condemned where he lived. Privilege is pretty fuckin’ cool, isn’t it.

Why is this random dude who looks classically attractive and apparently has the cash to eat out all the damn time darkenening the doors of his local Chipotle on the daily? For the swag. So he can change the hearts and minds of unhealthy people around the country, just like every other self-righteous health nut.

“I started this because I want to inspire people to be fit and not give up on their fitness goals. A lot of people try fad/crash diets like a no/low carb diets that does not work and then get discouraged very quickly. I want to show people that they can be fit while still enjoying the food they love,” Cunningham states in his Chipotle manifesto.

Asked by the New York Daily News why he’s willing to risk his life eating potentially contaminated cuisine, Cunningham further delved into the sacrifices he’s made to stand in line at a brick and mortar restaurant, agree to the extra guacamole fee, and pay for the same combination of beans, rice, meat, and tortilla substance.

“There’s a reason (most) fast food places don’t have bacteria outbreaks. They fry it off anyway. If they’re serving fresh food, there’s a chance you can get sick from it but I trust the employees and Chipotle enough that I wasn’t scared,” Cunningham said, putting his faith in his one true god.

Cunningham may make his goal but that statement on fried shit sounds a whole lot like a tacit endorsement. Deep-fried goodness keeps the bacteria at bay? Now that is something I can get behind.