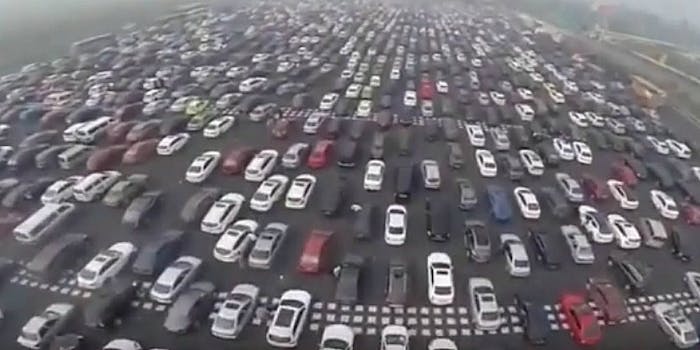 Maybe everyone should just stay home next year.

With hundreds of millions people celebrating Chinese Golden Week, it makes sense there was a large traffic jam on a major highway near Beijing as the week of celebration wound down and normal life was set to return.

Kind of like when you’re hightailing it back home after a long Labor Day weekend of imbibing, and you get caught up in miles of traffic. Except this Chinese jam makes your three-day weekend traffic look like a police-escorted ride down a wide-open highway.

According to the People’s Daily Online, the drone footage was taken earlier this week on the G4 Beijing-Hong Kong-Macau Expressway, and the reason for the backup that reportedly went on about six miles was because of a new checkpoint that decreased the amount of traffic lanes from 50 to 20. Also, foggy weather reportedly played a big role.

Also: tons of people on the road and rails. China’s National Tourism Administration said, via rt.com, that more than 750 million Chinese were on the roads for the holiday, occurring between Oct. 1 and 7.

So, that looks frustrating. Either way, though,, this traffic jam makes the Chris Christie-credited George Washington Bridge holdup of 2013 look like a languid Sunday-afternoon drive in the country.