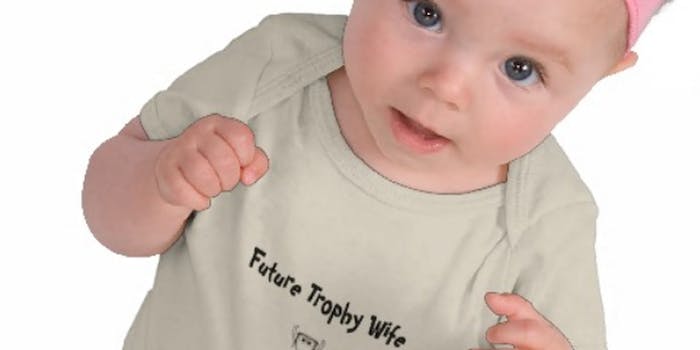 Everything wrong with sexism in science in 1 awful T-shirt

As one particularly idiotic Children's Place tee would have it, the problem is simple: Girls are just dumb.

A picture speaks a thousand words, but it takes something special to encompass all the gender-based sociocultural factors that keep women from advancing in science, math, technology, and engineering.

As one particularly idiotic T-shirt would have it, the problem is simple: Girls are just dumb.

A Web store called the Children’s Place has already pulled the T-shirt that drew thousands of outraged Facebook comments earlier this week. The purple and pink girls’ tee lists the wearer’s “best subjects” as shopping, music, and dancing.

Beneath this list, there’s a box for “Math” that’s left—surprise—unchecked. But that’s OK. As the shirt reminds us, “nobody’s perfect.” 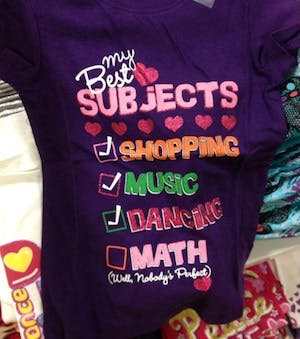 Of course, girls who are consistently told that they are bad at math regularly perform worse than girls who are told that they can learn and improve. But what’s to let a little thing like an entire systemic gender gap regarding women’s participation in the fields of Science, Technology,  Engineering, and Math (STEM) get in the way of some silly marketing? It’s all in good fun, right?

Not to the outraged commenters on the Children’s Place Facebook. “It isn’t a fun shirt, it’s a shirt that propagates sexist ideas about what girls should be ‘good’ at,” wrote commenter Neil Lewis on Monday. “My daughter is smart and good at math! Shame on you!!!” echoed a mother named Dana.

Katie McKissick, creator of a webcomic called Beatrice the Biologist, presented a guest blog to Scientific American yesterday arguing that the T-shirt goes beyond humor for those who wear it. Girls are literally wrapping themselves in the message—that because of their bodies, they can only do certain things.

I was definitely angry about it, but more than anything, when I see something that so profoundly feels like a slap in the face, I want to talk to each and every person in the decision chain that led to the actual design and production of such a horrible shirt because I desperately want to understand the motivation behind such a thing. I want to know how supremely out of the loop they are about the current efforts to get more girls and women in science, technology, engineering, and math careers, how teams of people are working tirelessly to dispel the myth that girls are “just not good at math” and science and anything involving higher order thinking, apparently.

McKissick’s argument that T-shirt messages matter is easily corroborated by the correlation between negative reinforcement and girls showing lower test scores in STEM subjects. Another study about leveling the gender gap in education notes, “Girls and boys enter school with what appears to be equality of interest and performance in mathematics and science.” But by puberty, when girls reach the age at which their self-esteem levels drop sharply, “girls’ interest and performance in math and science begins to steadily decline.”

But taking down girls’ self-esteem and belittling their math skills, all in the name of “humor,” seems to be a trend that shows no sign of stopping. 2011 alone saw a quadrifecta of jaw-dropping T-shirt sexism aimed at pushing the message that being a girl and being good at math were mutually exclusive things. “Allergic to Algebra.” “I’m too pretty to do math.” “I’m too pretty to do homework, so my brother has to do it for me.” Other shirts, like “Future trophy wife,” send different versions of the same message.

“It has come to our attention that some of you view our Best Subjects T-shirt as insensitive towards girls and women,” stated the Children’s Place in its apology late Monday. “This was not our intent. There are countless women in all walks of life who excel in math, including our very own CEO.” The comments were subsequently filled with commenters urging the offended consumers to get a life and get over it

Interestingly, the Children’s Place created another version of the same shirt–but this version, which makes no mention of math, was only sold in Canada. 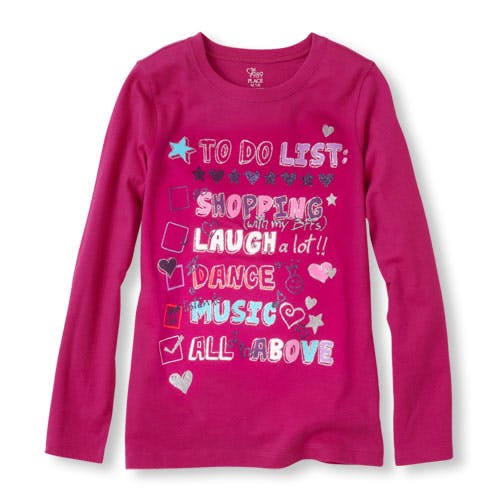 The fact that the American version of the shirt wasn’t sold in Canada, and vice versa, suggests that Children’s Place was marketing to the idea of the “American girl,” complete with all the stereotypes that entails. And Canada ranks slightly ahead of America in the global gender gap.

But ultimately, no matter how many social factors contribute to the creation of a single crass sexist stereotype making its way onto a T-shirt, the effects land squarely on the shoulders of teenage girls and continue at every stage of their lives. Girls are less likely to take AP exams than boys, and of the girls who do choose to take AP Calculus, only 41% choose to take the hardest version of the test. And while first-year female students have more interest in STEM subjects at the college level than men; yet women filter out of college and grad-school STEM subjects at a rate far higher than their male counterparts. And once they’ve fought their way through post-grad, women have a harder time than men earning tenure in their STEM fields of study.

The National Coalition for Women and Girls in Education released a 2005 overview of the 35 years in education since the passing of Title IX, a landmark clause in the 1972 Education Amendments that emphasized gender equality and equal opportunity.  The report notes that “women still only earn 20% to 25% of degrees in physics, computer sciences and engineering, and the culture of STEM fields still isolates and excludes girls and women.”

It adds that “educational institutions should cultivate girls’ and women’s talents in STEM.”

But educational institutions can only do so much when young girls can get an inferiority complex in all sizes, ages 4 and up.