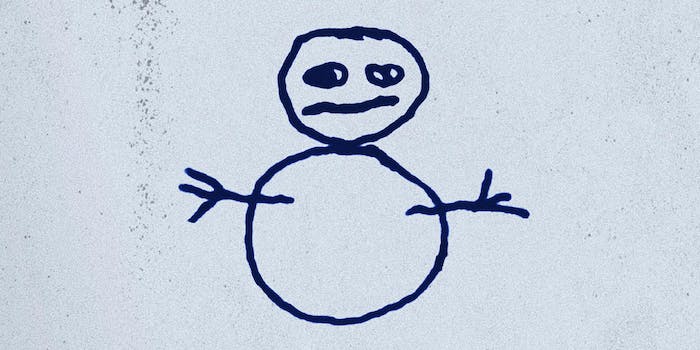 Photo via The Snowman

Mister police, can you send me some design software?

The posters for The Snowman, a real film in theaters right now, seem like they were designed as an internet prank. The font looks like something that a neighbor would scribble in a passive-aggressive note, and it’s accompanied by an image of a very sad-looking snowman. Just look at these posters:

never getting tired of this. these posters should be mandated to stay up forever pic.twitter.com/FZ4CDS2ygo

i made myself laugh so hard i cried looking at this poster for the snowman pic.twitter.com/Dr5xY3Ec9l

Yes, these posters are advertising a thriller movie about a serial killer. It’s not a parody. Yet instead of convincing people to see an apparently scary movie, the unintentionally hilarious posters became a meme.

MISTER POLICE
YOU COULD HAVE SAVED HER
I GAVE YOU ALL THE CLUES pic.twitter.com/RthhBnO1aG

mister police. you could have saved her. i gave you all the clues. pic.twitter.com/HMSaqGAYPU

mister police I gave you all the clues pic.twitter.com/fwjfIIqVoE

Several people have already dressed up as the The Snowman stick figure for Halloween.

Hello Mister Police. You know I had to do it to em. I gave you all the clues pic.twitter.com/VAb9F5xQnj

HELLO MISTER POLICE
YOU COULD HAVE SAVED HER
I GAVE YOU ALL THE CLUES #TheSnowman #Halloween pic.twitter.com/R9yELnDVgg

Wanted to have a hand in the slow death of a **lovely** meme this Halloween season ❤️goodbye, Mister Police #IAmMisterPolice pic.twitter.com/ZRHkvQDBiH

The funniest part about this story? The minimalist illustration of the snowman in the posters actually looks like the one in the film. The dour-looking snowman is still more funny than scary.

tfw mister police takes ur gameboy before u can save pic.twitter.com/K2yZCvwGv8

But here’s the real kicker: The note isn’t even in the film!

Everything is a lie.