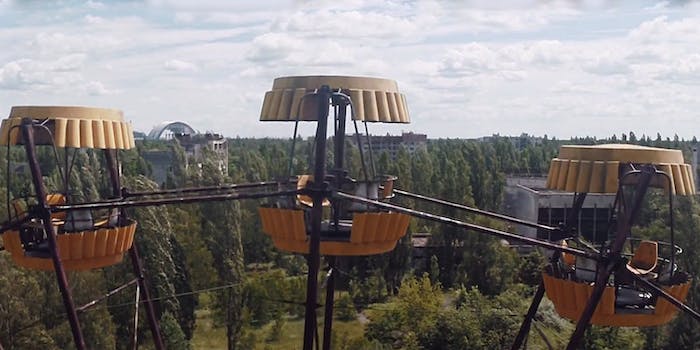 Explore Chernobyl like never before, courtesy of a drone

Get an entirely new perspective on a historic site.

Prepare to see Pripyat, home of the Soviet-era Chernobyl Nuclear Power Plant, like never before. A British man has used a drone to offer entirely new angle on the abandoned Soviet city, which became famous for the Chernobyl meltdown on April 26, 1986.

British videographer Danny Cooke made “Postcards from Pripyat, Chernobyl” in his spare time while filming a segment for CBS News. His aerial footage, recorded using a DJI Phantom 2 drone and a Canon 7D camera, provides a fascinating look at the iconic shots that have come to define a city that has been empty for decades: Decaying ferris wheels, neglected Soviet monuments, heavily-wooded city squares.

“Chernobyl is one of the most interesting and dangerous places I’ve been,” Cooke wrote on Vimeo. “The nuclear disaster, which happened in 1986 (the year after I was born), had and effect on so many people, including my family when we lived in Italy. I can’t imagine how terrifying it would have been for the hundreds of thousands of locals who evacuated.”

“There was something serene, yet highly disturbing about this place,” he added. “Time has stood still and there are memories of past happenings floating around us.”