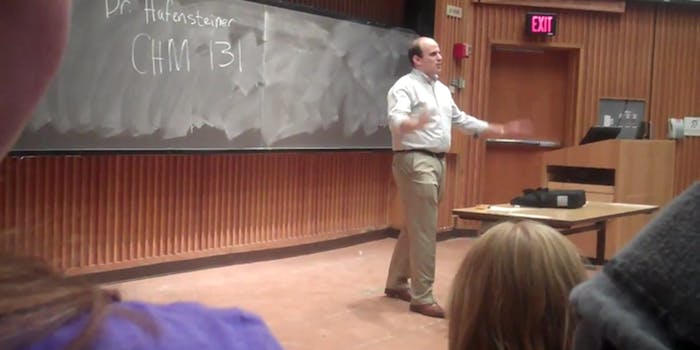 Prankster poses as a chemistry professor to terrorize freshmen

University of Rochester freshmen get a rude awakening.

Those YouTube pranksters Chamber Boys sent one of their members to deliver some bad news to University of Rochester freshmen, on the first day of chemistry class: No one can use a laptop, or go on Facebook, and most of the class will fail. Then the real professor shows up.

The comments section got particularly riled up about the fake professor asking students to put away their laptops, and also about blackboards, for some reason. One commenter, who might be an actual University of Rochester chemistry student, said this:

“The real professor does do this one thing where if your phone goes off, you have to go up front and do your best rendition? of the national anthem.”

Perhaps if the prank was allowed to play out a bit longer, it would have ended up like this Mr. Show law professor sketch.