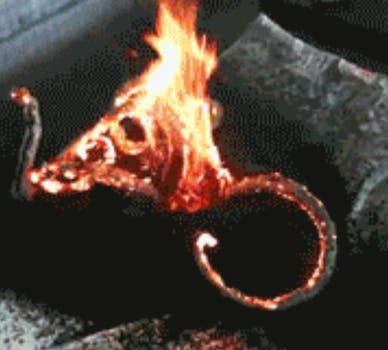 Scientists have finally discovered a way to summon the Kraken, a legendary sea monster with giant tentacles known for attacking ships.

And all it takes is some fire.

This Kraken-like creature is actually the Chemical Volcano + Pharaon Snake, a fireworks display that produces long, moving tentacles that could make a grown man squeal.

The following Chemical Volcano + Pharaon Snake GIF was created from a 3-year-old Polish YouTube video, which has been viewed more than 70,000 times. For all you science buffs out there, one YouTube commenter explained how the fireworks were created:

On Reddit’s r/ChemicalReactionGIFs, the community compared the fireworks display to Cthulhu, author H.P. Lovecraft’s fictional monster with a face made of tentacles.

“SHIET, WE OPENED A PORTAL TO HELL AGAIN,” Quote_a commented.