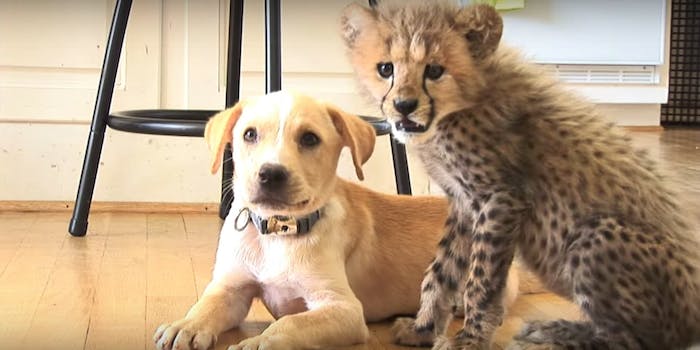 Puppy and cheetah break the cuteness scale with their friendship

Please let Disney make a movie about these two.

Richmond Metro Zoo in Virginia is home to our new favorite unlikely animal friendship: Kago the dog and Kumbali the cheetah cub.

Zookeepers adopted Kumbali after his mother failed to provide enough milk to keep him healthy, meaning that he had to spend a lot of time alone being fed by humans. To make sure he grew up with the right kind of animal social skills, the zookeepers introduced him to Kago.

Now Kago and Kumbali are the best of friends, playing together indoors and out, and basically being thoroughly adorable.

The scientific explanation for their friendship is that dogs are a calming influence on cheetahs, which are far more anxious than most other large cat species. That’s all fine and good, but we’re mostly just thinking about how great it would be if Disney made a movie about these two.