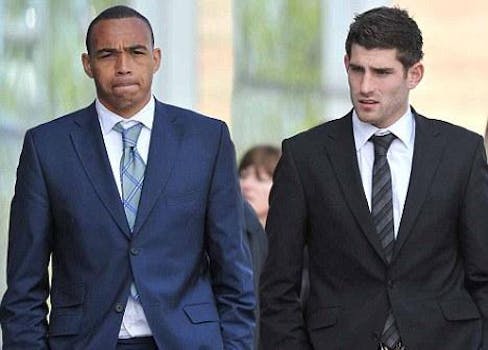 Nine Brits have been sentenced for tweeting the name of a then-19-year-old woman who was raped by a Welsh soccer player.

Seven men and two women, ranging from 18 and 27 years old, were each fined £624 (almost $1,000) for revealing the name of a sexual assault victim, according to the BBC. All pleaded guilty and said they didn’t realize it was a crime to use the victim’s name in social media. At least two of those sentenced had a personal connection to the rapist, Sheffield United striker Ched Evans: his cousin Gemma Thomas and friend Craig McDonald.

A third woman denied the charge and was granted bail until Jan. 21.

Under the Sexual Offences (Amendment) Act 1992, it’s illegal in the United Kingdom to publicly reveal the name of a sexual assault victim, regardless of how long it’s been since the crime. Those nine who were fined weren’t the only ones to tweet the victim’s name: Television station Sky News also reported it and quickly apologized.

One woman who pled guilty, biology teacher Holly Price, retweeted the woman’s name. She told the court that she felt like an “idiot” and wished she could apologize. Another, Benjamin Davies, said he was drunk when he posted his tweet. A third, Paul Devine, said he was a Sheffield United fan who angrily composed the tweet after the team lost.

Evans, 23, was convicted in April after having sex with the woman, who said she had no memory of the incident. The court found that she was too drunk to give consent, and sentenced him to five years in prison.

There was a flurry of outcry on social media immediately after Evans’s conviction, and at least 17 people were arrested at one point or another for allegedly revealing the woman’s name.

There might be another flurry soon: Evans maintains his innocence, and is up for appeal Tuesday.

Photo of Evans (right) via @JulianL06/Twitter