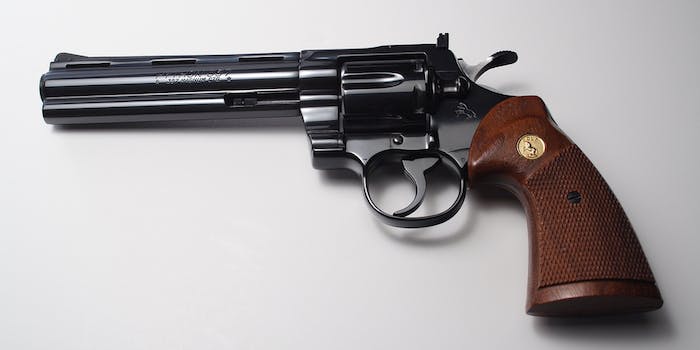 When will we finally say enough is enough?

The Internet was rocked on Thursday morning after reports circulated that nine people were shot inside Emanuel African Methodist Episcopal Church, a historically black church in Charleston, South Carolina. Dylann Roof, the alleged shooter, was taken into police custody on Thursday.

As Time’s Eliza Gray reports, Roof “was arrested twice earlier this year.” Gray writes, “[A]ccording to the Lexington County Sheriff’s department… he had been booked at the Lexington County Detention Center on February 28 and April 26, after being arrested by the Columbia Police Department.” Additional reports show he had drug charges on his record.

While the Internet searches his social media accounts for clues—like a pre-Apartheid South African flag stitched onto his jacket in a Facebook photo—his prior criminal record bears the most scrutiny. How was a 21-year-old with a criminal record and prior trespassing allowed to operate a firearm? According to Dylann Roof’s uncle, Carson Cowles, Roof was given a .45-caliber gun as a gift on his most recent birthday.

Before he dispatched that present on one of his victims, Roof reportedly said, “You rape our women and you’re taking over our country. And you have to go.”

If this act of racially motivated violence bears a striking resemblance to this February’s NAACP bombing, it did not escape the notice of President Barack Obama, who commented on the attack this Thursday morning in the White House briefing room. “I’ve had to make statements like this too many times,” he lamented. “Sometime as a country we’ll have to reckon with the fact that this type of mass violence doesn’t happen in other advanced countries. It doesn’t happen in other places with this frequency. It is within our power to do something about it.”

And Obama is right: After the shootings in Newtown, Connecticut; Aurora, Colorado; and Santa Barbara, California, we will continue to repeat our history of gun violence until we act to reform our laws on firearms.

While this sounds like anathema to National Rifle Association supporters, stricter laws on gun ownership are widely popular among the American people. A 2013 poll from the Washington Post and ABC News showed that a huge majority of Americans are in support of universal background checks for gun owners, and nearly every other poll validates those findings. After all, how many innocent people need to be gunned down before we realize that America has a gun problem?

If you’re unconvinced, a website called Shooting Tracker presents evidence on the subject that is incontrovertible. According to the site, “the U.S. averaged a mass shooting every day in 2013,” and by May 26, the time the site was last updated, there had already been 119 in 2015. That’s .81 shootings for each day of the year so far. On four days—Jan. 11, March 20, May 3, and May 24—there were four shootings all in different states, while April 18 racked up a whopping five mass shootings in total. In nearly every one of these cases, the shooter remains unidentified.

While the ubiquity of mass shootings might suggest that all areas of the U.S. experience gun violence equally, that is—of course—far from the case. A 2013 study from the American Journal of Public Health showed that there’s a strong correlation between states with a higher rate of gun ownership and the number of deaths by firearm. As Mic’s Jenna Kagel reports, “after looking at data from all 50 states from 1981 to 2010, the journal determined that gun ownership is a ‘significant predictor’ of firearm homicide rates, so that each time gun ownership increases by a percentage point, the firearm homicide rate goes up by 0.9 percent.”

Before he dispatched that present on one of his victims, Roof reportedly said, “You rape our women and you’re taking over our country. And you have to go.” Sounds like a great gift.

On the flip side, the economist Richard Florida argued in a 2013 editorial for the Atlantic that states with low rates of armed homicide all have one thing in common: strict gun control laws. Australia found the same thing after passing sweeping legislation on gun reform in 1996—laws that were enacted following the Port Arthur massacre in which 35 people were brutally murdered by gunman Martin Bryant. In the decade following the measures, gun violence plummeted, with armed homicides falling by 59 percent by 2006.

If there’s a clear leader in responsible governance on gun violence, it’s undoubtedly Japan, a country that has all but eliminated mass shootings. In 2006, just two people were killed as a result of firearms, and the following year—which was considered a violent year by the country’s standards—that number shot up to 22. In comparison, America bested that figure by Jan. 14, a span in which an additional 54 people were wounded. A gun death rocks Japan, whereas in the U.S., the Charleston shooting was ignored by a number of mainstream media outlets.

Japan has, of course, eradicated gun violence by all but banning guns—as few of the country’s residents own personal firearms—but that need not be the case in order to prevent future Charlestons and Newtowns. Japan’s armed homicide rate is around .01 deaths per 100,000 people, whereas England and Wales have a combined rate of just .07.

For a country that’s unlikely to curb gun ownership altogether, Britain’s model may provide a good compromise. The country has outlawed automatic weapons for personal use, and as Business Insider’s Walter Hickey reports, “The only firearms that can be owned legally are shotguns, black powder weapons, manually-loaded cartridge pistols and manually-loaded center-fire rifles.”

Their country requires citizens to apply for a certificate in order to purchase a firearm; in order to apply, Britons must be more than 14 years old and demonstrate “good reason” for its use. The country additionally restricts firearm use among those with criminal records—who are banned from owning a gun for five years after their sentence ends—and goes much further for those who serve more than three years behind bars: They are banned from gun ownership for life.

After all, how many innocent people need to be gunned down before we realize that America has a gun problem?

These policies could have saved the lives of every person in Emanuel African Methodist Episcopal, but it’s still far too easy to gain access to a gun in the U.S. In 2013, a two-year-old girl was murdered by her older brother in Kentucky, who had procured a loaded rifle from his family’s living room. According to the Guardian’s Sadhbh Walshe, this was not happenstance: “The rifle the boy used to accidentally kill his sister was his very own ‘first rifle’ designed specifically for use by small children and bought for him by his parents.” He was five years old.

When these stories are so ubiquitous on the Internet, it’s easy to pretend that the killing of innocent people is just another fact of life. The sun rose today; thus, nine people were shot to death in South Carolina. Although America’s culture of death has become the norm, it only takes one Port Arthur to change it.

It’s time to finally say that enough is enough.