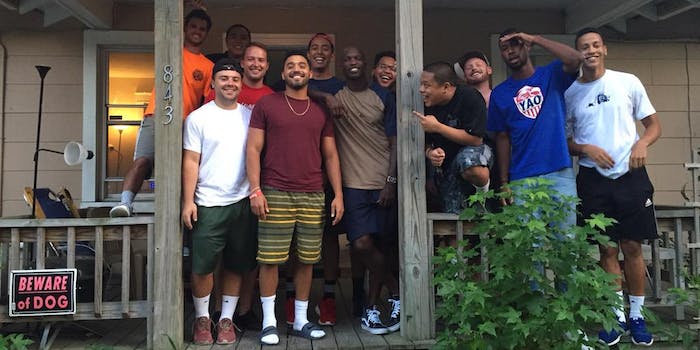 Minutes after proclaiming himself the King of FIFA 15 on Twitter, former NFL receiver Chad Johnson declared Monday that he was ready to take on all video game comers.

Anybody in Norfolk play FIFA15, I will come to your house & politely embarrass you on Xbox One in front of your family & friends…

For a man who in his employed days routinely announced via Twitter that he was headed to the movies and that he’d pay for whomever showed up—and then actually fulfill his pledge—Johnson’s Twitter challenge seemed like a serious dare.

And it was, because soon after, somebody accepted. And that somebody was this guy.

Fool think I won't pull up to his house & go straight to the refrigerator then beat him in FIFA15, he gone learn today…

After taking an Uber from Richmond, Virginia, to Norfolk, Virginia— about a two-hour commute—Johnson showed up at his opponent’s house, and the games (mental and physical) began.

Chad Johnson issued a FIFA challenge and then actually showed up at someone’s house. http://t.co/LQesPrJnEB pic.twitter.com/xkMrPcQpm7

I'm over here passing out L's in FIFA15 in @TheeCMo house…

The two played two matches. In the first, TheeCMo upset Johnson 4-3 before Johnson stormed back for the victory in Game No. 2.

But it was impossible to know who actually won the challenge.

As CBSSports.com’s Jared Dubin noted, “As of this writing, a score for Match No. 2 has not been released. This is very important information because when a two-leg soccer match ends in an overall tie, you break the tie by giving victory to the team that scored more goals in its road game. If Johnson won Match No. 2 by more than one goal, it’s irrelevant, but if he only won it by one, then the people of America need to know the final score.”

Not that it really matters, because, it actually seemed like one helluva day for everybody involved.