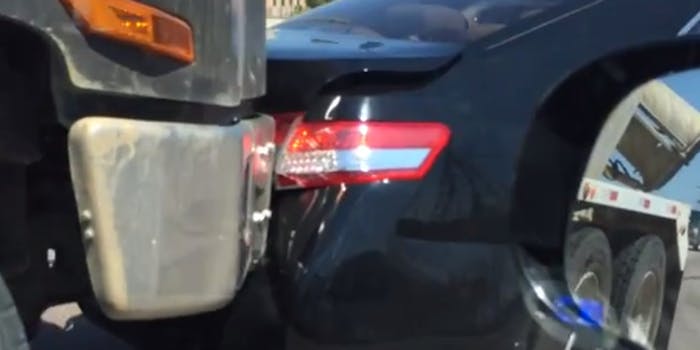 Road rage: Why you never cut off a cement truck driver

As if you needed another reason.

We’ve all heard stories of road rage. But rarely in those tales does a disgruntled driver’s vehicle overpower the target of the rage so thoroughly as this.

In the video below, a cement truck driver completely disregards any standards of vehicular operation by rear-ending a black sedan then continuing down the freeway like nothing ever happened.

Thing is, this isn’t just some standard hit-and-run—the cement truck brings the black sedan along for the ride.

“When I noticed that neither vehicle came to a stop after the accident I started to record,” writes jtocs.

As one redditor with a really solid computer zoom notes, the lady getting rear-ended doesn’t seem to mind that much.