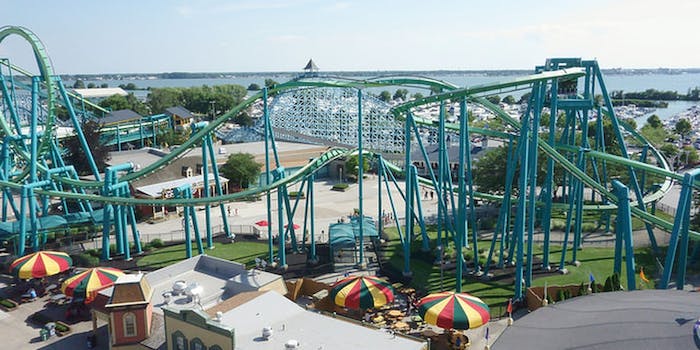 Cedar Point, one of the most popular amusement parks in the country, played host to a deadly tragedy Thursday evening when a man was hit and killed by a rollercoaster while looking for his phone.

At 5 pm, a guest entered a restricted, fenced area of Raptor and was struck by the ride. Our thoughts and prayers are with the family.

Erie County coroner Dr. Brian Baxter told the Toledo Blade that a white man in his 40s was looking for his cell phone underneath Raptor when the ride struck him in the head.

“He apparently jumped over the fence and then when he stood up he was hit by the Raptor, that’s what we think,” Baxter said, via NBC Chicago.

Asked about the possibility of the man committing suicide, Baxter said, “No, not at all. From what we saw, we have no reason to believe it was anything but accidental.”

According to the park, the rollercoaster reaches speeds of up to 57 mph, and on the website, Raptor is described thusly: “Get ready to catch some big air: when you ride Raptor the only thing under your feet is sky. You really will feel snatched up by a bird of prey as the Raptor takes you wherever it pleases, turning you upside down six different times before returning you safely to solid ground. It all starts when you hear, ‘There goes the floor, you’re out the door—enjoy your ride on Raptor!'”