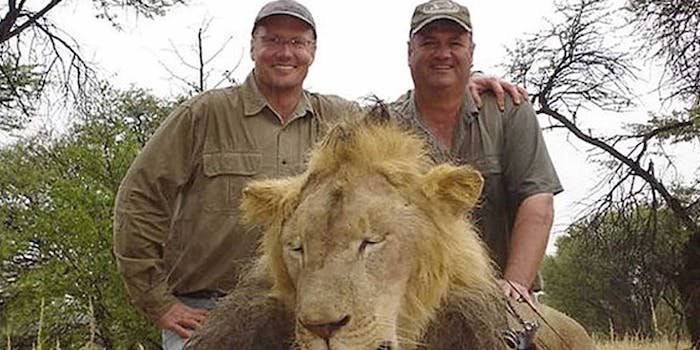 The Internet enjoys the hunting of a different species, and cases like this make that painfully obvious.

The case of Walter Palmer the Dentist and Cecil the Lion is making international headlines. For those who haven’t been following the story, Palmer shot and killed a lion in Zimbabwe in a way that likely broke the law. The lion happened to be both part of a research study and a popular “local favorite” among visitors to the park where he lived.

The Internet Is Very Angry.

And with good reason. “Trophy hunting” is a vile, cowardly, and disgusting act. There’s nothing sportsperson-like about hunting down big animals with the aid of experienced guides in a carefully curated “hunt” conducted solely for the purpose of bringing back a grisly trophy to show off in your living room. It’s foul. “Trophy hunters,” as far as I am concerned, are terrible human beings, and I have no problem with calling them out on that.

I say this as a hunter. I have no problem with hunting per se—and partake of a variety of (legally taken) wild fish and game. Hunting is a valuable source of sustenance for some people; others, like me, enjoy things like venison and abalone when they’re taken sustainably, just like others enjoy factory-farmed pork or ethically-raised beef. In some cases, hunting provides a net benefit to the environment, as in the case of deer. California is facing major deer overpopulation right now, and the drought is putting huge pressure on that population; issuing deer licenses is a way to relieve that strain.

I totally respect those who don’t hunt and disagree with the practice, I respect those who believe that consuming animal products isn’t for them or who actively think that people who eat them are bad people. But I think we can both agree that trophy hunting is a shitty thing to do that serves absolutely no function other that allowing people to derive some kind of sick pleasure from bringing down beautiful animals for no reason at all.

Moreover, the continued tolerance for trophy hunting feeds the practice—while some governments argue that issuing expensive permits helps them fund conservation operations, it still doesn’t justify trophy hunting. It should be put to a stop immediately.

“Trophy hunters,” as far as I am concerned, are terrible human beings, and I have no problem with calling them out on that.

Palmer, it turns out, is a big fan of killing animals for fun. He travels all over the world to do it. He’s also a big fan of violating the law to do so, as evidenced in a 2008 guilty plea regarding a bear hunt. Incidentally, thanks to Palmer, Cecil’s six cubs will likely be killed in a territorial tussle over what remains of his pride. Good job, Walter. (He also settled a sexual harassment complaint in 2009, so he sounds like a super great human being.)

The facts of the case are still emerging, so this paragraph comes with a big fat allegedly. According to the latest available information, Palmer and two guides conspired to lure the lion out of the park (because animals can’t be hunted in the park) before he shot Cecil with a bow. Bow hunting is a particularly popular form of “trophy hunting” because apparently it’s especially cool to hunt with a bow. However, Palmer is apparently a terrible shot, because the men tracked the wounded lion for over a day before shooting him (with a gun this time).

After that, they beheaded and skinned him, removed the tracking collar put on his as part of the study he was involved in—an action that is, by the way, illegal—and considered it a job well done.

After the case blew up on the Internet, Palmer posted a public statement, clearly realizing that this PR nightmare was not going away. “To my knowledge,” he claimed, “everything about this trip was legal and properly handled and conducted.” He passed the blame neatly off onto his local guides in a truly classy approach to the situation. They’re currently under investigation and may face poaching charges, and the Internet is already calling for Palmer to be extradited to Zimbabwe to face a little justice of his own.

He went on to state, “I had no idea that the lion I took was a known, local favorite, was collared and part of a study until the end of the hunt,” because apparently it’s fine to kill lions who aren’t celebrities or part of studies. Maybe that’s true from a legal perspective, but from an ethical perspective, it stinks. Palmer made the choice to actively participate in the hunt of a wild animal and then horrifically maul the body because he thought it would be fun. Notably some media sources believe that he likely still hasn’t imported the “trophies” from his hunt, because the U.S. actually frowns upon bringing these kinds of things into the country.

Palmer is apparently a terrible shot, because the men tracked the wounded lion for over a day before shooting him (with a gun this time).

So not only did he kill a lion, but he mutilated the body in a really horrific way and then (possibly) tried to cover it up. The case has exploded because Cecil was a local celebrity, but it’s not like this is the first time a “trophy hunt” has been conducted under less than legal circumstances. It’s also not the first time someone has been pilloried in the court of public opinion for being involved with the practice.

Last year, Kendall Jones perhaps unwisely posted photographs of herself proudly posing with dead animals. The Texas Tech student was also attacked on social media and claimed that she received death threats over the photos. She was unrepentant about her participation in “trophy hunts,” referring to herself as a “conservationist.”

I have no problem with shaming people like Jones and Palmer.

However, the Internet crossed the line with Jones, and it’s doing the same thing in the case of Palmer. Criticizing people for engaging in “trophy hunting” is an entirely legitimate activity, as is calling for a thorough investigation into the situation and a fair trial for those involved. Calling for penalties like sanctions, revoking hunting and fishing licenses, and possibly barring Palmer from visiting Zimbabwe again—if he’s pronounced guilty—is also reasonable.

But that’s not what’s happening. Palmer is being doxed, with people not only posting openly available information about his business, but also ferreting out details about his home. People are harassing his clinic and patients, trying to trash his business on Yelp, and making a nuisance of themselves to staff. People are showing up at his home to harass him.

We’ve spent the last year having a huge conversation about how doxing is not OK and how it poses a real threat to the careers, lives, and wellbeing of the targets, while terrifying family members—as well as the target. We’ve seen people driven out of their homes by threats and unable to attend public events without substantial security because of Internet abuse. Those people, of course, were engaged in the radical act of suggesting that maybe the gaming industry has some sexism issues, so the root cause of their abuse was quite different, but this is still a chillingly familiar refrain.

While Palmer is a horrible human being, threatening his life and family is not acceptable. Attempting to torpedo his business (which includes other dentists, staff members, and support teams, all of whom will suffer if “activists” get their way in trying to shut it down) is not acceptable. Showing up at his home is not acceptable. Generating a slew of Change petitions before knowing anything about the facts of the case is really dubious behavior.

Writing about the case at the Washington Post, Alyssa Rosenberg articulated many of my own thoughts on the matter: Yes, he sounds like a not great guy, but no, that doesn’t mean we are allowed to threaten him/his family, his career, or the livelihood of members of his staff.  “Internet Justice may feel righteous,” Rosenberg writes. “But there’s something awfully risky about turning our keyboards into gavels without agreed-upon sentencing guidelines or even an agreement about what constitutes bad manners.”

The Palmer case, as with so many others, is illustrative of the incredibly dangerous Court of Internet Opinion, where people are condemned in a instant—even if they later turn out to be totally innocent, as in the case of Sunil Tripathi, who was hunted down by Redditors and accused of being involved in the Boston bombing. He was found dead just off the shore of Providence, Rhode Island approximately a week later, and had “been in the water for some time.” It’s entirely possible he died before the bombing even happened.

For the Internet, news flashes by in an instant, and situations magnify just as quickly, along with demands for instantaneous resolution and justice. Everyone wants an immediate reaction, realities of the situation aside, and there is no time for a thoughtful, measured response. If people fail to deliver, the Internet goes into overdrive, sometimes with devastating results.

By all means, let’s condemn “trophy hunting” for the horrific thing that it is. And let’s talk about how people like Palmer are terrible human beings for their carefully orchestrated and ridiculous “hunts” of beautiful animals who should be enjoying protected status rather than fleeing hunters. And let’s definitely interrogate this case and request that it be fully investigated, with charges filed as appropriate.

But doxing Palmer, threatening him, and attempting to ruin his life makes us no better than he is. Because, don’t lie to yourself: The Internet enjoys a trophy hunt of a different species, and cases like this make that painfully obvious.