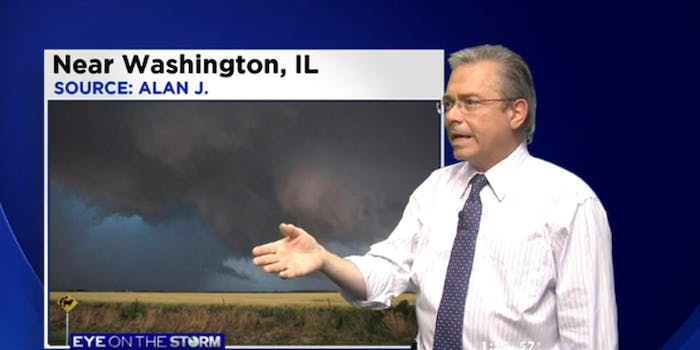 This viewer noticed something kinky during CBS’s tornado coverage

Somewhere, the viewer known only as Alan J. must be pretty proud of himself.

Given the recent emphasis on crowdsourced footage for television news coverage, it was only a matter of time before a station got trolled in prime time.

Exhibit A: This screenshot spotlighted during CBS affiliate WBBM’s coverage of the massive storms in the greater Chicago area. Meteorologist Ed Curran described it as “a very dramatic photo from the Washington, Ill., area.” He neglected to mention the Photoshopped sign in the lower left-hand corner that appears to show a man having sex with either a sheep or cow.

The photo’s actually from the tornadoes in Oklahoma in late May.

Somewhere, the viewer known only as Alan J. must be pretty proud of himself.