You can help fight cancer by watching these cat videos

A new nonprofit, Cats vs. Cancer, brings the Internet endless fun—all for a good cause.

If there are two issues on which the world stands united, they’re cats and the fight against cancer. A new nonprofit, Cats vs. Cancer, aims to bring the Internet endless amounts of fun in the form of feline-themed content, and it’s all for a good cause.

Cats vs. Cancer is the creation of Georgetown graduates Tom O’Connor and Eddie Peña. Seeking to capitalize on the Internet popularity of cats and the videos and memes based on them, the nonprofit hopes to take what people are already doing on the Web and use it to generate money for various cancer charities by selling ad space.

“The more visitors and [the more] popular we get, the more advertising dollars we can raise each month to help fight cancer,” Peña explained. “We aren’t asking for individuals to donate their money, we just want them to donate their time by enjoying our site and coming back often… but if they’re feeling super-generous, they can always hit the ‘donate meow!’ button.” 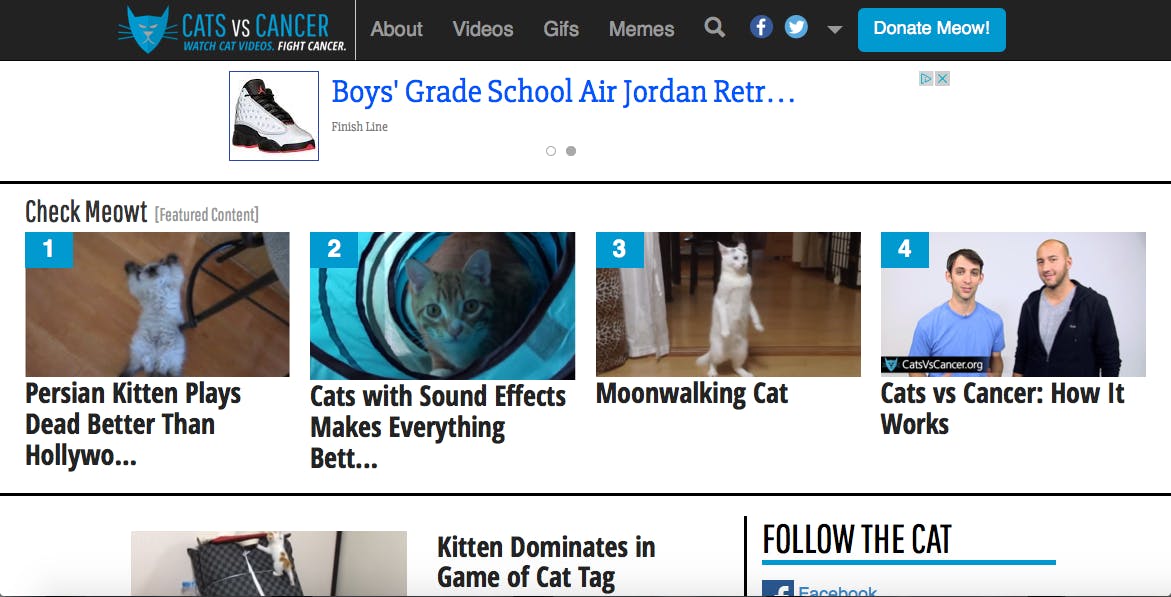 Cats vs. Cancer launched on Dec. 1, but they’ve been building the site since 2012. Cofounder Tom O’Connor came up with the concept after realizing the Internet was great at raising money for charitable causes. “You can ask anyone you know and they can probably name someone close to them who’s been affected by cancer, so it’s an important cause to us. But we realized we love charities that help you have a good time while also doing something good for others.”

Why the focus on cats? “Cats rule the Internet!” Eddie exclaimed. “What makes cat videos so special is that a lot of times it seems like cats don’t want to be filmed. When people catch them on camera in those small moments, hilarity is bound to happen. And you don’t really have to be a cat person to think cat videos are hilarious.”

The nonprofit is a passion project for O’Connor and Peña; their company currently consists of just six people. As far as they know, they’re the first IRS-certified 501(c)(3) organization to focus on creating a humor-based website that generates money for charity by monetizing their site’s popularity through digital advertising.

Their first charity partner is the Vickie S. Honeycutt Foundation, an organization that assists educators and their immediate family members who are currently battling cancer. They’ve been in talks with a few major cat brands about partnership possibilities, and while they aren’t ready to let the cat out of the bag yet (sorry), O’Connor and Peña have high aspirations.

“The sky’s the limit. We hope to grow into one of the top 100 publications on the Web. I want people to think of us like BuzzFeed Animals, except all the time they spend on our site is for a good cause.”

Photo via Rochelle Hartman/Flickr (CC BY 2.0)