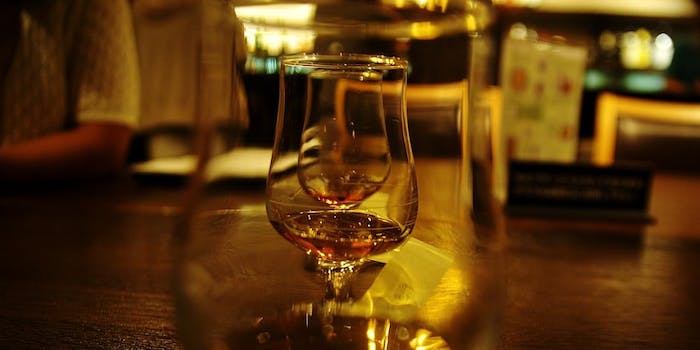 Badass downs 4 shots of whiskey and nails a backflip

Catfish Cooley is more spry than you might imagine.

If you’re like me, you probably celebrate Meatless Monday (sometimes) and Taco Tuesday (most every time). Perhaps we should be like the guy in the video below and start observing Whiskey Wednesday.

Take a look at the video and try to tell me you don’t agree.

A couple of things.

1) Has anybody, other than Catfish Cooley, tried to mix Jim Beam, Wild Turkey, and Crown Royal before? Because I imagine that concoction would be strong enough to sprout hair on your chest (and probably your back).

2) I can’t imagine taking the equivalent of four shots like that, doing a cartwheel and backflip, and then NOT puking immediately afterward.

3) I enjoy watching gymnastics as much as the next guy, but how much would ratings for those televised events increase if, after every routine, the gymnast (male or female) would snort like a wild boar? Probably tenfold, right?

4) If you need more inspiration, click this link where Catfish Cooley says things like, “It ain’t everybody that’s meant to be fitness models like yours truly. But we’re all meant for something. You got a boat, that son of a bitch was meant to drive on the water. You got a diesel truck, that was meant to pull trailers. You got a fast car and motorcycles, that was meant to haul ass. Everybody ain’t meant to take and do the same damn thing. We’re different. Go out there and find what the fuck you’re good at.”

5) Seriously, watch the video linked in point No. 4. It’s hysterical.