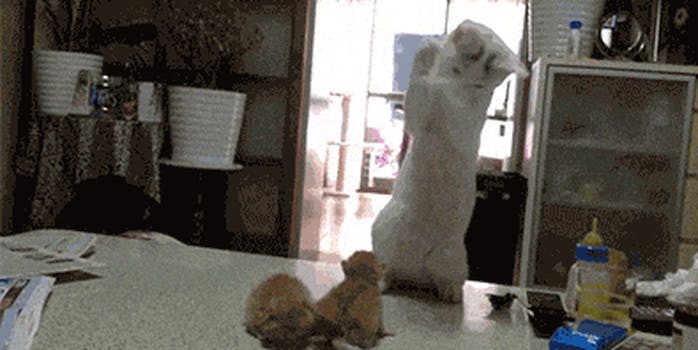 That's one way to fight.

It appears as though no one knows exactly what’s going on in this video depicting a full-grown cat teaching two kittens how to fight.

Is it a male cat or a female? Good question. Who knows! Some say “Papa cat,” though Reddit believes the kitty to be a mother. Either way, it’s adorable, only 30 seconds long, and part and parcel packaged for the Internet.

The more interesting confusion going on with this video actually pertains to who created it; the proper owner of the clip doesn’t appear to be racking up any credit. Who posted the video to YouTube’s anyone’s guess at this point, but the bulk of the views assigned to the clip are on what appears to be a copied video.

Which isn’t to say that the earliest-dated rendition of the video is the originating source either. A quick scan of YouTube user HamadaEdrees’ videos shows he’s got a penchant for creating mirrors. But his “Cat Teaches Kittens How To Fight” clip, posted in late April, has only racked up 82 views. That’s hardly anything. The one that came along one week later has found a whole lot more success.

YouTube user Kamzer’s “Father-Cat Teaches Kittens How To Fight” has picked up 211,000 views since going online on May 8, though its tally of likes and dislikes (755 and 37, respectively) suggests a number of those views are fabricated.

In any event, you can’t fabricate cuteness.