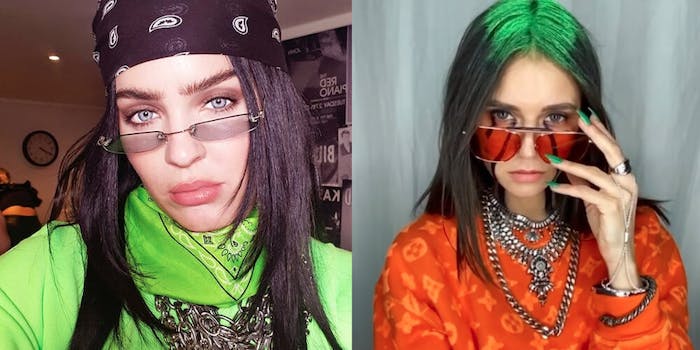 Billie Eilish responds to celebrities dressing up as her for Halloween

From Nina Dobrev to Jameela Jamil, Billie Eilish seems to be the go-to celeb costume of the year.

Billie Eilish‘s “bad guy” cyberpunk look is inspiring celebrities to dress like her for Halloween, and she couldn’t be more excited about it.

Vampire Diaries star Nina Dobrev debuted her Billie Eilish-inspired Halloween costume on Instagram, sharing a video of herself modeling the look to the song “bad guy.”

“Duh,” the actress wrote in the post along with. “I’m the bad guy.”

Jameela Jamil also rocked one of Eilish’s signature looks from her “you should see me in a crown” video, donning a spider-covered silver crown.

“I’m dressed as Silly Eilish, the weird third sibling they didn’t tell you about. Frightfully good fun DJ’ing preview night for @Spotify’s Halloween costume pop-up, open on Saturday. Being a little scary isn’t a bad thing, come celebrate the boldness of artists and grab a costume accessory while you can,” Jamil captioned the photo series.

Singer Anne Marie had fans doing a double-take when they caught a glimpse of her Halloween costume.

“About last night! #kisshauntedhouseparty so much fun. Anyone guess I am ? Lol,” Marie wrote.

Fans were quick to point out how much the two resemble one another.

“For a second I thought you were ACTUALLY Billie Eilish,” one wrote.

But no one was more excited to see celebrities inspired by Eilish than the singer herself.

“This shit is tripping me out,” Eilish posted on her Instagram story, along with a video of Marie’s costume. She also said the crutches and boot were “very accurate.”

Eilish later shared a photo of Jamil’s costume and exclaimed that it also had her tripping.

Eilish is well on her way to inspiring many more people. She recently announced her upcoming 2020 U.K. arena tour, and her brother Finneas O’Connell confirmed that she is already working on her second album.

If her next album’s visuals are any bit as spooky as those for “When We Fall Asleep, Where Do We Go,” they are sure to inspire more Halloween costumes next year.